Terry Reagin told the ‘Alabama Political Reporter’ in a phone interview Monday that he has decided to suspend his 2012 campaign for Congress.

Mr. Reagin said that both Alabama State Senator Scott Beason (R) from Gardendale and Tea Party Activist Al Mickle would be good congressmen.  Mr. Reagin made the decision to endorse Sen. Beason saying “I agree with him on a lot of the issues.”  He also thought that Sen. Beason already having won an elected office made him more electable.  Mr. Reagin said, “Al Mickle is a very worthy opponent.”

Mr. Reagin was running to represent Alabama in the 6th Congressional District, a seat currently held by Rep. Spencer Bachus (R) from Vestavia. Mr. Reagin had been fighting to be on the ballot as an independent. Alabama has recently reformed its ballot access law to make it more difficult for independents and third parties to get ballot access.  The state of Alabama requires that an independent candidate must receive a set number of signatures (depending on the number of voters) of registered voters from within the boundaries of the voting district for the office.  Mr. Reagin and his supporters had collected well over 2,000 signatures but needed over 7,000 more signatures by the March deadline to meet Alabama’s qualification requirements.  Mr. Reagin said, “We just decided that it was just too big of a mountain to climb.”  “That is why they (the state legislature) made it that way.”  Mr. Reagin made the decision to suspend his campaign late last week.  Mr. Reagin said that he is not giving up politics but is concentrating his efforts on getting prepared for the 2014 election.

Terry Reagin is a U.S. Air Force and Army Reserve veteran.  He lives in Leeds, is an engineer, and has five children.  On his website he said of himself: ” I am just an average American guy born in 1961, raised in a variety of states and taught the traditional American values such as; tend to your own business, treat others as you would like to be treated, respect others property, and obey the law.” 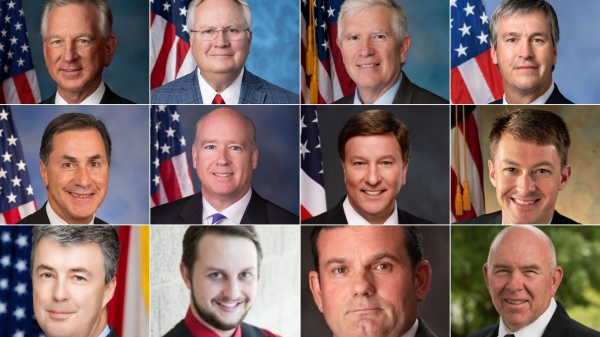 The Alabama politicians who supported overturning the election

We're compiling a list of lawmakers and elected officials who supported Rep. Mo Brooks's effort to overturn the 2020 election results.