Representative Sewell said, “Today, I voted against the Republican Fiscal Year 2013 Budget resolution, a budget proposal that would result in harsh cuts to vital programs, investments and services. This Republican budget proposes drastic cuts to discretionary programs by approximately $120 billion and mandatory programs by $284 billion. This budget would leave America’s middle-class families, seniors, children, and our most vulnerable without a life-line to continue to recover from this economic recession.”

Rep. Sewell said, “The proposed cuts in this budget dangerously reduce funding for infrastructure projects, critical Medicare and Medicaid services and education funding. Furthermore, it does nothing to help incentivize the creation of jobs and put Americans back to work.”

Rep. Sewell continued, “At a time when we should be investing in our nation’s infrastructure projects such as building roads, bridges and schools, this proposal seeks to cut $31.5 billion in transportation spending, eliminating funding for high-speed rail projects and any new intercity rail initiatives.”

“Lastly, this budget continues to provide tax breaks to millionaires and billionaires without giving tax relief to struggling middle class Americans. We all must share the responsibility for reducing our nation’s deficit.  It is unfortunate that instead of putting forth a budget that would create jobs, balance our budget and spur economic growth throughout our country, we once again, see divisive politics and no common ground.  As we move forward, it is my hope that we pass a 2013 federal budget that works for all Americans,” Representative Sewell finished.

Rep. Sewell said earlier, “I agree with the President that the recovery of our American economy must be built upon two fundamental principles – protecting the middle class and promoting shared sacrifice and collective responsibility.” “America is and has always been most successful when we invest in our people—middle-class families and small business owners—who can grow our economy from the bottom up. We can no longer afford to provide tax breaks to wealthy Americans by depriving seniors and the middle class of the support they need and deserve. Everyone must do their part.” 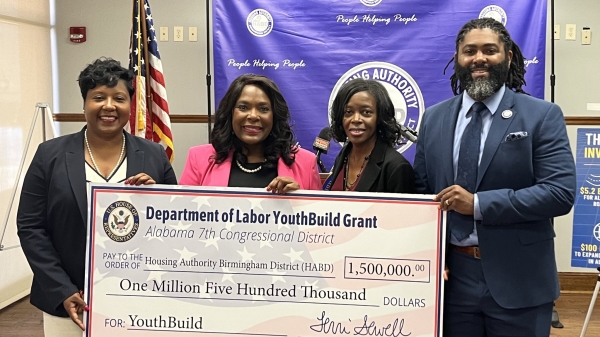