MONTGOMERY—The Business Council of Alabama began the process of finalizing its 2013 State Legislative Agenda during a two-day meeting last Thursday and Friday in Prattville. Known as “Committee Leadership Days,” the annual event brings together members of BCA’s seven policy committees and state and legislative leaders. Each committee meets to discuss the previous year’s legislative session and submit a draft agenda for the 2013 legislative session. BCA’s final legislative agenda will be submitted to the BCA governmental affairs committee and is subject to approval in December by the BCA board of directors.

“Our members who represent three-quarters of a million working Alabamians trust us to fight for the private sector in protecting the job-creating and tax-producing business sectors when it comes to setting policy in the state capital,” said BCA President and CEO William J. Canary. “Expanding existing industry, preserving Alabama’s status as a right-to-work state and improving Alabama’s public education system are cornerstones of this agenda.”

Leaders from both the state House of Representatives and the state Senate were also in attendance to provide an insider’s look at legislation passed last year and hear ideas for new pro-business legislation in 2012. Senate President Pro Tem Del Marsh addressed committee members on Thursday afternoon, while State Superintendent of Education Tommy Bice provided an update on Plan 2020 and the future of career technical education during the Friday morning breakfast.

“Our state leaders have demonstrated their commitment to the private sector by joining us at this annual event to learn more about the BCA’s legislative agenda,” said BCA First Vice Chairman Carl Jamison, a shareholder partner at Jamison Money Farmer, PC in Tuscaloosa.  “The BCA agenda has built upon the blueprint we have laid out over the last few years, and we have begun laying the foundation on which businesses in our state can continue to grow and expand.”

In addition to BCA’s Governmental Affairs Committee, the seven policy committees that met in Prattville were Education and Workforce Preparedness, Environment and Energy, Health, Judicial and Legal Reform, Small Business, Tax and Fiscal Policy, and Labor and Employment.

The Business Council of Alabama is Alabama’s foremost voice for business. The BCA is a non-partisan statewide business association representing the interests and concerns of nearly one million working Alabamians through its member companies and its partnership with the Chamber of Commerce Association of Alabama.  BCA is Alabama’s exclusive affiliate to the U.S. Chamber of Commerce and the National Association of Manufacturers.

Currently, Sanders serves as an assistant attorney general and governmental affairs director for the State Department of Education. 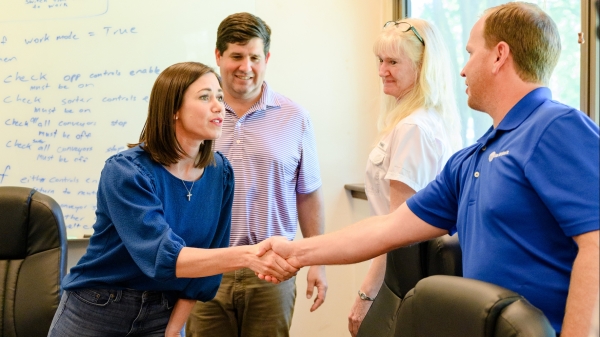 Britt also opposes a plan to pull back on small business deductions and eliminate them for higher-earning businesses.