Alabama Governor Robert Bentley (R) announced Wednesday that more than $15.7 million will be awarded to nine local governments for long-term recovery from the deadly tornadoes which devastated parts of the state in April 2011.

Gov. Bentley said, “This funding will help make communities whole. The storms were devastating to so many areas. But since the storms, we’ve seen a remarkable spirit of recovery. The recovery is a long-term process, and this funding will make a tremendous difference.”

Nine local governments were awarded a total of 16 grant awards and 3 low interest loans totaling $15,751,534. The city of Cordova in Walker County was awarded $1,392,613. The Cordova award money will help with site preparation and construction to help lure a grocery store to the town whose downtown area (including the town’s only grocery store) was devastated by a tornado.

The city of Moulton in Lawrence County will receive $375,000 for a new fire station.

The city of Phil Campbell in Franklin County is to receive three awards totaling $2,450,000 for streets, sewers, economic development, and the Community Action Partnership of North Alabama.

The city of Tuscaloosa received a $500,000 loan for business relocations. Tuscaloosa was also awarded $2,970,000 to repair or replace multi-family housing units lost in the tornado.  Tuscaloosa County was awarded $300,000 for street repairs and $1,600,000 for sewer system repairs in the Holt Community.

The grant awards are funded by a special allocation that the state of Alabama secured from the U.S. Department of Housing and Urban Development. Gov. Bentley said, “While we are very thankful for this additional federal support, we also know there are many worthwhile projects that are still seeking funding.  My administration will continue to work with all affected communities to connect them with as many resources as possible.”

In a two week period in April 2011 Alabama was struck by a devastating series of tornadoes that touched down in large swaths of the state.  The total area damaged was roughly the size of the state of Connecticut.  More than 250 people were killed in Alabama.  Another 2,200 people were injured. According to the Federal Emergency Management Agency (FEMA) the state lost 6,237 houses and 1,275 mobile homes.

Shortly after the disaster, Gov. Bentley tasked ADECA with working to obtain the funding to repair (and in many cases completely replace) Alabama infrastructure which was decimated by the storms.  Since WWII more people have been killed by tornadoes in Alabama than in any other state.

Earlier in the year, ADECA secured another $7.7 million from HUD to help rebuild or renovate approximately 300 houses in 20 affected Alabama counties. Those funds were specifically for owners or tenants who were uninsured or underinsured. 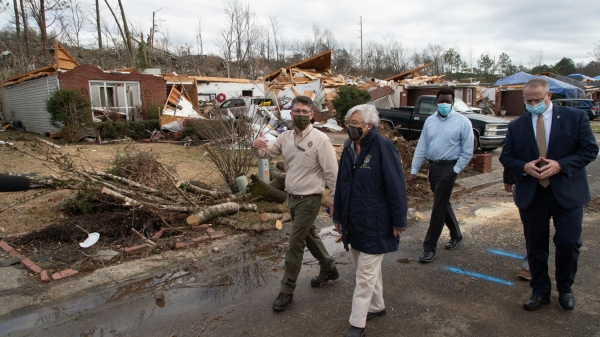