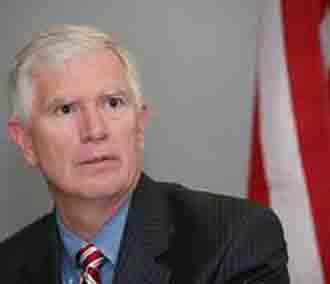 On Monday U.S. Representative Mo Brooks (R) from Huntsville spoke on the floor of the U.S. House against tax increases on the American people demanded by members of the Democratic Party and the then looming fiscal cliff.

Rep. Brooks said, “By every economic measure, the Bush Tax Cuts were a spectacular success. Republican Congressmen and Senators voted 258 to 2, (that’s 99%), to cut taxes and protect family incomes.  In contrast, Democrat Congressmen and Senators who now say they are for protecting family incomes, voted 184 to 40, a whopping 81%, against American families and for higher taxes.”

Most importantly, and paradoxically to those who do not understand economics, this robust economic growth cut America’s deficit 60%, from $413 Billion in FY 03-04 to $161 Billion in FY 06-07.”

Rep. Brooks said, “Washington Democrats twice voted against tax increases on the wealthy, and twice voted against giving permanent tax relief to lower and middle income families, so that they could run campaigns on base human emotions like greed, envy and class-warfare and campaign against the very tax policies Democrats kept in place, thus deflecting attention from Democrats’ abysmal record on the economy, trillion-dollar deficits, and $16 trillion national debt.

To their credit, in 2012, their strategy worked.  Democrats won the White House and the Senate.”

Rep. Brooks concluded, “History proves Democrats raise taxes whenever they believe they can get away with it. Conversely, history proves Republicans protect as many American families as possible from Democrat tax increases.”

Brooks voted against the fiscal cliff deal that passed the Congress on Wednesday.
Congressman Mo Brooks represents Alabama’s Fifth Congressional District.  He recently won a second term in the United States Congress.  Rep. Brooks and Rep. Roby both voted against the 2011 Budget Control Act that set the stage for the mandatory sequestration cuts which is part of the fiscal cliff crisis that our nation’s leaders are dealing with today.