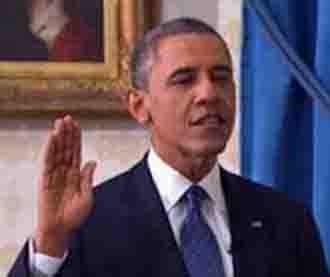 There will be a second unofficial swearing in ceremony for the gathered public today.  An estimated 600,000 people are in Washington D.C. today for the public swearing in, the parade, the balls, and the other events. President Ronald Reagan was the last President who had two swearing ins because the constitutional date for the inauguration fell on a Sunday, which traditionally is not a day for public ceremonies such as a Presidential inauguration.  This follows a tradition for dealing with Sunday inaugurations set by Pres. James Monroe in 1821.

Congressman Mike Rogers (R) from Saks website said, “The 57th Presidential Inauguration will be held on Monday, January 21, 2013, on the West Front of the U.S. Capitol.  In the past, gates have opened around 9:00 a.m. on Inauguration Day, and a musical prelude began at 10:30 a.m.”  “Due to large crowds, everyone is encouraged to arrive early to ensure they will be cleared into ticketed areas by the time the ceremony begins at 11:30 a.m.  This event is historically cold and wet. The crowds will be very large and guests will likely be outside in the cold for at least three hours.”

With so many people crowded into the capital city security is obviously a serious concern.

Congresswoman Martha Roby (R) from Montgomery said on Facebook, “With so many people coming into town for the inauguration this weekend, I’m proud to know the important role our state plays in protecting the nation’s capital. The special dogs trained to sniff out dangerous materials at the Capitol complex are trained at Auburn University’s Canine Detection Training Center.” Rep. Roby referred to a ‘Roll Call’ article which called these top Alabama trained dogs the “Michael Jordans” of bomb-sniffing breeds.

In addition to the gathered political dignitaries, James Taylor, Kelly Clarkson, Lady Gaga and Beyonce’ are all scheduled to perform during the inauguration events.

President Barack Obama defeated Republican challenger Mitt Romney on November 6th.  The Obama-Biden ticket won every state that it won in 2008 with the exceptions of North Carolina and Indiana. The last time that a Democratic Party Presidential candidate carried the state of Alabama was for then Georgia Governor Jimmy Carter in 1976.