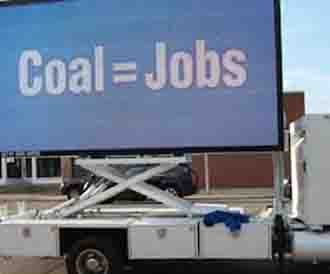 MONTGOMERY—It is said that politics makes strange bedfellows, in this instance it might be better phrased, losing jobs makes for common alliance.
So, it is when President of the Alabama AFL-CIO Al Henley and staunch Republican Public Service Commission President Twinkle Cavanaugh are seen on the same side of an argument. Both are willing to fight for coal mining jobs in Alabama.
Recent infighting at the Public Service Commission has driven many in the GOP to agree with Henley that a war on coal is a war on jobs and that war seems to be heating up in Alabama.
“We are not in it for the power company. We are not in it for the Public Service Commission. We are not in it for anybody but ourselves,” said Alabama AFL-CIO President Henley. “We are fighting for our lives because it’s my union members that maintain every coaled-fired plant in the state of Alabama and work there everyday.”
Henley, is not a man to be underestimated, neither should the around 5,000 coal miners who work in the state.
According to Henley, “Roughly 20 to 30 percent of the miners in Alabama are mining coal for the power companies.”
Cavanaugh said in a phone interview on Wednesday, “The coal industry directly employs five thousand people and indirectly effects hundreds of thousands of jobs in Alabama.”
Cavanaugh, who has been an advocate for coal’s future also said, “The thing about coal is that it keeps our utility prices down. Our direct access to coal keeps our prices down in Alabama which makes us able to recruit industry like Mercedes, ThyssenKrupp, and Hyundai.”
It is jobs that has leaders like Henley and Cavanaugh worried because as they see it coal means jobs.
Henley says that the average wage for coal miners in Alabama is “about sixty to eighty thousand a year.” He says that with that kind of income, “You can achieve the American dream.”
Henley questions all the talk about good paying jobs coming to Alabama, “They keep saying that they are good jobs but the people I talk to are always a few dollars short every payday of being able to have a solid middle class standard of living.”
But even those jobs might be in jeopardy if coal mining is devastated in Alabama.
Henley says he believes that “environmental groups that are supported by [PSC Commissioner] Dunn’s office” are working to close coal fired plants in the state.
He also said that he doesn’t understand President Obama’s position on coal-fired plants either.
In 2008, Obama told the San Francisco Chronicle that under his administration, “If someone wants to build a coal-powered plant, they can. It’s just that it will bankrupt them.”
There are those who believe that the president will use regulations in concert with environmental lawyer to close coal-fired plants across the nation.
Just recently, 15 coal-powered units were scheduled for closure in Georgia. According to a story in the “Atlanta Journal Constitution,” this will remove, “20 percent of electrical capacity from its power grid.” http://m.ajc.com/news/business/georgia-power-looks-for-alternatives-to-coal/nT7Yx/
The article says that, “Hailed by its defenders as reliable and cheap and blasted by critics as dirty and inefficient, coal helped shape America’s history, powering steamships and railroad engines. But the resource has come under increased scrutiny for two reasons — environmentalists’ pressure on the Environmental Protection Agency to raise clean air standards and a precipitous drop in the price of natural gas.”
Henley says he and his members are concerned that the environmentalists are working in Alabama to do here what they have done in Georgia.
In fact according to the January report, “Just five years ago, 70 percent of the fuel used by Georgia Power to produce electricity came from a source lambasted by environmentalists from shore to shore — coal. Today, that number is down to 47 percent.”
Commissioner Cavanaugh see the same trend in Alabama, “In 2007, over 60 percent of electricity was made using coal, five years later it’s 50 percent and the trend seems to be going down.”
Fox News in Georgia, reported that the plant closing would cost around 480 jobs. They also reported that, “Federal regulators and environmentalists say power plants are responsible for about half the nation’s mercury toxins, which contaminate water and fish. The new regulations are designed to help prevent premature deaths, asthma and other health problems, but coal industry officials, say the aggressive rules are costing jobs and driving up the price of electricity.”
A toxic fear is pervasive for those who believe that the recent calls for court-like hearings at the PSC will lead to a scenario were environmental lawyers will use the proceeding to destroy Alabama’s coal industry through lawsuits.
Real or imagined, the closing of coal-fired plants in the neighboring state of Georgia is seen by many as an omen if things are allowed to get out of control.

AFL-CIO President Richard Trumka was 72. A cause of death wasn't immediately provided.