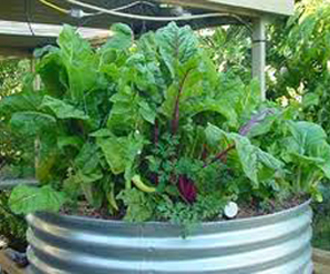 On Saturday, February 9th preppers from all over the state gathered with the Shelby County Preppers at the Hope Christian School in Pelham to discuss topics related to surviving if and when society fell into either a short or a long period of disorder.  One topic that was discussed at length was growing your own food.

Aquaponics was the focus of much of the food discussion. Pastor Wayne Atchison of Hope Church and Christian School is a local aquaponics expert with his own operating aquaponics system behind the church.

Aquaponics is a method of growing both fish and vegetables in a soilless system by which the plants roots systems are emersed in overflow water from the fish tank.  Since the plants can’t be immersed in water all the time or they would drown the water is drained and then sent back to the fish tank.  The fish steadily release ammonia into the water through the excreta and gills of fish as a product of their metabolism, but too much will make the water toxic and must be filtered out of the water.  The plants filter the nitrates and other nutrients out of the water as part of the growing process.  The plants grow in a bed of clay balls (hydroponics media) that is flooded and drained regularly from water from the fish tank.  Reverend Atchison said that you can also use fine gravel.

The plans are grown with their roots immersed in the nutrient-rich effluent water. After the water has passed through the hydroponic subsystem, it is cleaned and oxygenated and return to the fish tank. This cycle is continuous.  Rev. Atchison said that his own system produced enough fish and vegetables to feed multiple families.

According to the website, aquaponics.com aquaponics works especially well with leafy crops such as lettuce, spinach, arugula, bok choy, herbs, and most of the common house plants will easily do well in almost any aquaponics system. In a system that is heavily stocked with fish, fruiting plants such as tomatoes, squash, beans, cucumbers, and peppers can also do well.  The preferred species of fish are: tilapia, largemouth bass, sunfish, crappie, koi, goldfish, pacu, and various ornamental fish such as angelfish, guppies, tetras, swordfish, mollies.  Some people have also raised bream, carp, barramundi, perch, and catfish in aquaponics systems.

The preppers also discussed what to include in a “bugout bag.”  A bugout bag is a bag with supplies like a gun, ammo, food, first aid supplies, cash, a change of clothes, etc. you can grab (or keep all times with you) in case you have to leave in an emergency.

Former Republican candidate for Congress and event organizer, Al Mickle asked everyone to contact their state legislators and urge them to back the Omnibus Firearms Bill sponsored by State Senator Scott Beason (R) from Gardendale.

The next meeting of the group is in April.