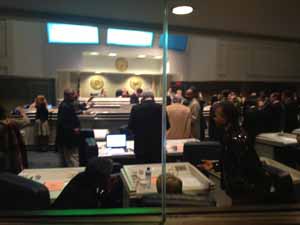 MONTGOMERY–Governor Robert Bentley signed the 2013 Local School Flexibility Act late Thursday evening. The ceremony was rumored to have been being planned while the bill was still being debated on the House floor and before it came back to the Senate.

HB84 regarding Local School Flexibility was passed on the Senate Floor on Thursday afternoon. An amendment preserving teacher benefits and tenure was added. When sent back to the House for them to concur it received an unfavorable reception. A joint conference committee was called.
The conferees from the House were Reps Jay Love (R-Montgomery), Chad Fincher (R-Semmes), and Laura Hall (D-Huntsville). Senate conferees were President Pro Temp Del Marsh (R-Anniston), Senators Gerald Dial (R-Lineville) and Senator Quinton Ross (D-Montgomery). The audience mainly included media, AEA representatives and charter school lobbyists including Students First. The Speaker’s staff was also on hand.

During the meeting the Republicans requested a recess and return in 30 minutes. After an hour, they returned with a substitute increasing the bill from 8 pages to 27 pages and including verbiage related to “non-public schools.”
Ross accused the Republicans of resurrecting the Charter School Bill during the recess of the committee. Marsh insisted that this was not a charter school bill since it only address failing schools.

One of the changes to the bill was the addition of a definition of a “failing school” although it was never discussed during the meeting.
Marsh said, “I have had people come to me over the last two weeks with ideas about flexibility and that is what is incorporated into this document.”

He said the substitute is now being referred to as the Alabama Accountability Act.
“It creates a tax credit for failing schools, provides students in a chronically failing school to attend a non-public school or non-failing public school. The objective is to provide families stuck in a failing school system with another option,”

Parents of the students in a chronically failing school zone may receive a tax credit to offset the costs of sending their student to a non-public school or a non-public private or parochial school. The income tax credit will be equal to 80 percent of the average annual state costs for a public K through 12 student.

For those families that may not make enough income to receive the tax credit, it creates a credit for taxpayers, individuals and businesses, who donate to a nonprofit who will provide scholarships for students to attend non-public schools or non-failing public schools. Businesses who donate to this will get an income tax credit of 50 percent of their donation. Individuals who donate will get a credit of up to 100 percent of their donation up to 50 percent of their tax liability.
Democrat committee members cried foul. Quite a heated discussion ensued between sides.
After a favorable report, the bill was passed out of committee, at the dissent of the Democrats, the bill moved back to the House.

The heated discussion just passed onto the floor of the Senate. Ross went to the well twice in protest. As the votes for SB238 were being called Ross continued to ask for Point of Order but his requests went unanswered.

Ross said that the Republicans “should have brought a bill to do away with the Department of Education.” He went on to say that the way the conference committee was handled violated the open meetings law. Ross said, “They go into a closed door meeting without the media. The media was sitting right there in the room. We [Ross and Hall] were sitting in there with them in a room with no air conditioning.”

The bill passed the House with a vote of 51 to 26. When it came back to the Senate chaos ensued with massive shouting and arguing. The Democrats filled the well.
The Rules Committee invoked cloture and Marsh decided to take the allotted 25 minutes to explain the changes in the bill. When Marsh refused to yield to Ross the fight began. Ross talked over Marsh as he read Bice’s remarks.

Tommy Bice, Superintendent of the Alabama Department Education, released a statement saying that this bill was not the bill he supported. It read, “NONE of the added language to the Flex Bill has been vetted with us at the State Department/State Board of Education. There are SIGNIFICANT negative financial implications for all of Alabama’s public schools. THIS IS NO LONGER THE BILL I GAVE MY SUPPORT TO!” It was read aloud in both the House and the Senate.
After what looked more like a bar-room brawl than a senate debate the bill passed vote of 21 to 11.
The press was notified that Governor Bentley was holding a press conference in the press room 30 minutes after the adjournment of the Senate.

“In the conference committee, the majority left the minority sitting in a room with members of the press. They went and had a sidebar committee meeting and decided to bring a totally different legislation. That is wrong. It’s not fair. It really disrespects each one of us as legislators and those individuals that we represent.

“It is baffling to me that a Lt. Governor came in, brought in her parliamentary specialist, didn’t want to work with the Secretary of the Senate, how they created their own rules as we went along. There was no order. As you saw they did what they wanted to do without following the process. The one’s who have a financial interest in this are the ones that are pushing this.”

Senator Vivian Figures (D-Mobile) responded, “This was the ultimate deception. They let us talk about flexibility as it was leading us to believe it was a compromise and then they go into conference in the way that they did. I have never known that to happen in the 17 years I have been here.”

“Never before has the Senate seen such mob rule as is by this supermajority raided every public school system in the state with this special interest legislation that they developed in a closed-door meeting with a bunch of lobbyists instead of coming out on the floor of the Senate and having a debate. They have been planning this for weeks. Senator Marsh and them were gloating about it and running over everybody. You saw the Lt. Governor abuse the rules, abuse the power of it. She is the one that brought this sad day on the Senate,” said Senator Roger Bedford (D-Russellville).
AEA Executive Secretary Dr. Henry Mabry said, “The Governor lied to me.”