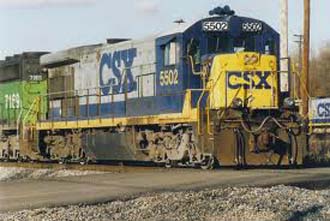 On Monday, CSX announced that the I-85 Site in Macon County, Ala., is the first site in the state to receive Select Site designation from CSX. The massive railroad reviews and identifies those locations that can rapidly utilize freight rail service through CSX’s Select Site program reviews. Sites identified as Select are those development properties that are most capable of being developed for manufacturing and distribution development. Select properties along the CSX network have lower up-front development costs because the standard land use issues have been addressed, the road and rail infrastructure is already in place and that site is ready for development.
Alabama Commerce Secretary Greg Canfield (R)was at CSX’s Select Site ribbon cutting in Macon County. Sec. Canfield said on Facebook, “This was a big step that will lead to a big win for jobs in Macon County.”

Alabama Governor Robert Bentley (R) said, “I’m excited to be in Notasulga today to take part in the CSX Select Site announcement. This site will help us recruit new well-paying, secure jobs for the people of Alabama.”

The Assistant Vice President for Regional Development at CSX, Clark Robertson said, “Through the Select Site program, we can increase speed to market and lower up-front development risk for companies seeking industrial property for manufacturing operations. This program helps communities identify and prepare sites that can compete for new investments and job creation.”

CSX has partnered with The Austin Company to screen site and assist site owners and local government in the application and certification process. The senior location consultant at Austin, Jonathon Gemmen said, “This 277-acre site in Macon County is well situated along the Hyundai-Kia automotive corridor just off I-85, the Interstate connecting Montgomery and Atlanta, Ga. The site is also in close proximity to Auburn and Tuskegee Universities. The cleared site is adjacent to CSX’s mainline and has all utilities on or within easy access to the property.”
In the CSX written statement the railroad giant recognized the Macon County Economic Development Authority, Wayne and Jimmy Bassett of Beck’s Turf Farm, the Utilities Board of Tuskegee, the Macon County Commission, the City of Tuskegee, the City of Notasulga, state Representative Pebblin Warren and State Senator Billy Beasley.

According to original reporting by the Auburn Opelika News Alabama State Rep. Pebblin Warren (D) said, “Despite of our most recent adversities and hardships we’ve had to endure in Macon County, we can stand proud and hold our heads high for our accomplishments here today with CSX.”

For many years Victoryland Hotel, dog track, and gaming hall at the nearby site in Shorter was the County’s largest private employer. The casino closed in 2010 after a series of court decisions indicated that Victoryland may have been operating in violation of Alabama Law for all those years. Victoryland reopened in December; but was closed down by Alabama Attorney General Luther Strange.

CSX maintains 21,000 miles of rail service in 23 states, the District of Columbia, and two Canadian Provinces. CSX provides rail service to more than 70 ports and connects with 240 short line railroads.

Through the Select Site program CSX has certified numerous other sites across its service territory. CSZ also has the Megasite Program, which focuses on sites of 1,000 acres or more. The railroad has already identified the the South Alabama Megasite in Baldwin County as a potential megasite for future development. The certified sites are featured on CSX’s web portal. To learn more, visit