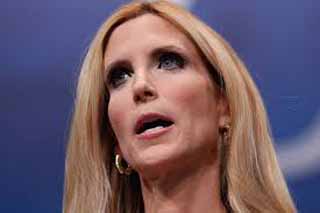 The Auburn Conservatives for Tomorrow (ACT) and the Young America’s Foundation are hosting an Evening with nationally known conservative author, columnists, and TV and radio personality Ann Coulter on Friday, March 22, 2013 at the Hotel at Auburn University.  Conservatives for Good Government are assisting ACT with this event.
The VIP Dinner & Photo Op begins at 5:30 PM, and the Program starts at 7:30 PM.  Program general admission is FREE for students and $20 for non-students at the door.  Email questions and requests to attend the Dinner and photo opportunity to ACT Director of Operations & Outreach Cody Garton at [email protected].

Ann Coulter has authored eight New York Times bestsellers, is the legal correspondent for Human Events, and is a syndicated columnist for Universal Press Syndicate.  Most people know her as a frequent guest commentator on The Today Show, Good Morning America, HBO’s Real Time with Bill Maher, Hannity, The Tonight Show with Jay Leno, the Glen Beck Show, and The O’Reilly Factor.

Coulter is a Connecticut native and graduated with honors from Cornell University School of Arts & Sciences, and received her J.D. from University of Michigan Law School, where she was an editor of The Michigan Law Review.
Coulter clerked for the Honorable Pasco Bowman II of the United States Court of Appeals for the Eighth Circuit and was an attorney in the Department of Justice Honors Program for outstanding law school graduates.  Coulter has practiced law in New York City, worked for the Senate Judiciary Committee, and has been a litigator with the Center For Individual Rights in Washington, DC before launching her career  as an author and conservative commentator.
Auburn Conservatives for Tomorrow are dedicated to the principles of individual responsibility, personal freedom, and free market economics. They state that they stand for using the lessons of the past for a brighter tomorrow and believe in a strong ethic based in Christian principles.