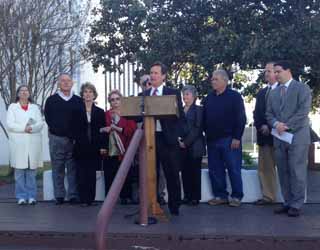 MONTGOMERY–Tuesday morning, Generation America and the Partnership for Affordable Clean Energy (PACE) announced the launch of a new partnership between the two organizations in a press conference on the steps of the Alabama Statehouse. The partnership is aimed at giving senior more of a voice in energy policies and discussions.

Lance Brown, executive director of PACE, said, “On both the state and national level, we see discussions on energy policy intensifying. We hear discussions about new carbon taxes from Congress; new regulations from the Environmental Protection [Agency] in Washington, DC; a State Energy plan process here in Alabama; and more. As talks about energy policy continue, it is absolutely critical that seniors of our state make their voices heard.”

According to their website, www.energyfairness.org, “The Partnership for Affordable Clean Energy (PACE) is a coalition of working people, business owners, environmentalists, and trade organizations who are fighting for fair, responsible energy policies.” PACE is headquartered in Alabama and advocates nationally for “fair, affordable energy policies.”

“A great number of seniors in Alabama, and across this nation, live on fixed incomes. Many of them live in energy inefficient homes. This means that energy policies that raise the price of electricity hit seniors the hardest,” remarked Conwell Hooper, regional director of Advocacy for Generation America a Texas-based organization focusing on conservative seniors.
“To give conservative Americans (Republican, Libertarian, Tea Party and other like-minded individuals) a membership organization that gives them peace of mind through advocacy in Washington, along with superior member benefits that contribute to member safety, security and well-being,” Generation America’s website says is their vision.

The organizations announced the launch of an online petition at www.PowerPetition.org and encouraged seniors to join them by going online and adding their name.

“By signing, seniors and those who support the cause of seniors can send a clear message that energy polity talks must include the perspective of older Americans,” said Brown. “It is time for seniors to stand up and be counted on energy policy with a conservative voice that defends their interests.”

Hooper said, “Our mission is to give older Americans a voice that stands for conservative values and common sense principles and that takes action when it believes their interests are being threatened. On behalf of Generation America, I am excited to join with PACE in a very important effort–the effort to ensure that energy policies and proposals don’t unnecessarily burden seniors.”