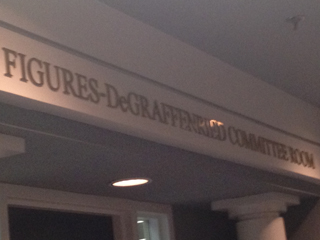 In opening remarks Ward said, “At the beginning of last year when the Senate and House decided to began needing more committee room space in this building, the leadership of the House and the Senate felt that the best way to utilize these rooms, in addition to providing more space, was to commend the legislators that had come before us from both parties and both chambers. We have had many magnificent leaders over the years. Some have left us already but have left an indelible mark.”
Family members were also present to receive the resolutions, Sandra deGraffenried, Ryan deGraffenried, III and Senator Vivian Davis Figures (D-Mobile).

Senator Vivian Davis Figures was elected to the Alabama State Senate in 1997 in a special election after the sudden death of her husband, Senator Michael Figures. She said that Michael made history when he was elected by his colleagues to be the first African-American President Pro Tempore  in his seventeenth year (1995). This year Senator Vivian Figures was elected Senate Minority Leader (the first woman to serve as Minority or Majority Leader in either the House or the Senate in the history of the legislature).

He was elected to the Senate in a special election when Richard Shelby was elected to the U.S. House of Representatives.
When Governor Guy Hunt was removed from office, Jim Folsom, Jr. became governor making deGraffnried the acting Lt. Governor. He ran for Lt. Governor in 1994, but was defeated in the Democratic primary by Don Siegelman.

His father, Ryan deGraffenried, Sr. ran for governor twice. The first time he was defeated by George Wallace. One day after qualifying to run again, he died, at 56, in a plane crash in northeast Alabama leaving the election to Lurleen Wallace.
Both deGraffenried and Figures were elected to the Senate in 1978.

Pat Harris, Secretary of the Senate, said, “These two men I knew since I started up here. Ryan deGraffenreid help make my job and Senator Figures helped save my job. They are both really heroes to me. It is truly an honor to continue to work with Ryan’s son and to work with Senator [Vivian] Figures over the years.”

Senator Michael Figures was one of the first three African-Americans to graduate from the Alabama School of Law in Tuscaloosa. First African-American senator from Mobile County in 1978. In 1995, he became the highest ranking state senator when he was elected to be Senate President Pro Tempore.
He was involved in the case that “broke the back of the Ku Klux Klan in Alabama” and the all-white city government of Mobile.
President Pro Tem Marsh spoke saying how honored he was to attend and speak at the event. “It is my pleasure to be here today and to see these two fine gentlemen that worked as pro tem much before me. I tell you when you have people like this to follow those footsteps, it’s tough footsteps to follow in. But they have done so much for this state and much of the impact many of you will never know.

“Both of these gentlemen would have been glad that this room made access to the public much more available. They were both for that.

For what they did for this state, this is a small tribute to that but a very fitting one.”

When Senator Vivian Figures was asked what her husband would have thought of this event, she said that he would be greatly honored. “He wasn’t a man that believed in a lot of awards or accolades, he was just about doing the work,” she said. “To have this done for him, he would truly be honored in particular since it is the judiciary committee room. He was a lawyer and he was all about bringing justice for everyone. He was that professionally, politically and in his private life. It was about justice and being there for people.”

There are pictures and the resolutions hanging on the interior wall of the committee room commemorating the careers of these two men.