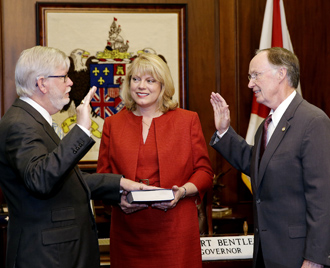 Gov. Robert Bentley said in a written statement, “Brunson will be given a tremendous responsibility to streamline the state’s information technology and help us improve efficiency across state government,” Governor Bentley said.  “His experience makes him ideal for this position.  He’s been responsible for major information technology projects.  He’s a proven leader in project management.  He will be able to take the skills that made him successful in business and apply them to improving efficiency in state agencies.  Brunson will help us organize I.T. to make it more efficient, to save taxpayer dollars and to make it more secure.”

Brunson White previously worked for the Energen Corporation in Birmingham for 33 years where he retired as Senior Vice President.  At Energen he oversaw $100 million in information technology projects and was involved in strategic planning, corporate development and more.

Secretary of Information Technology is a new position that was created by Senate Bill 117.  The recently passed legislation directs the Secretary to develop and implement a comprehensive clan to coordinate I.T. systems across state government.

Senate Bill 117 was sponsored by Alabama Senator Phil Williams (R) from Rainbow City.  Sen. Williams said in a written statement, “When it comes to the state’s IT functions and resources, we are operating in a very compartmentalized fashion, with each state agency essentially having their own separate IT department.  Establishing a centralized authority will provide the necessary infrastructure to ensure we’re providing quality IT services to state users and taking advantage of savings opportunities when it comes to purchasing hardware and software.”  “Alabama is one of only a handful of states in the nation that doesn’t have a cabinet-level IT official.  As the state operations become more and more dependent upon technology, it’s imperative that we have someone to hold accountable for making sure we’re doing operating in the most efficient and responsible manner.”