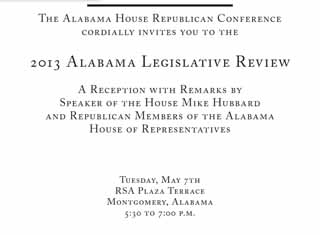 MONTGOMERY—Dinner and drinks Tuesday, 5:30 to 7:00, at the RSA Plaza Terrace, across from the statehouse. It’ll cost you as much as $5,000, but you’ll get to sit up close and personal while state House Republicans like Speaker Mike Hubbard blather on about how they have defended your rights during this legislative session.
Of course, you (like most of Alabamians) perhaps cannot afford $1,000 to $5,000 for one meal, a few drinks and 90 minutes of political grandstanding. That’s why you (like most Alabamians) probably didn’t get the invitation.

But  Montgomery’s well-heeled lobbyists and Big Business donors certainly received the invite to attend the May 7th soiree. In the most polite terms, it reads: “The House Republican Conference Cordially Invites You to the 2013 Alabama Legislative Review … A Reception with Remarks by Speaker of the House Mike Hubbard and Republican Members of the House of Representatives.”

For the corporate special interests who are still waiting for a bill to be passed, or for fat cats who still owe Mike Hubbard a favor, dropping five grand might be worth it.

To be fair, nothing about this fundraiser appears to be in violation of the letter of the Fair Campaign Practices Act, which regulates how politicians and political groups can raise and spend money. And, the fact is, this kind of money-grabbing event is nothing new to the statehouse, where the art of the political shakedown was perfected.
With many bills yet to pass for 2013—including the general fund budget and the education budget—it would seem an opportune time to seek donations from lobbyist and corporations that have interests before the House body.
Legal, yes. Smelly, certainly. The fundraiser might adhere to the letter of the Fair Campaigns Practices Act—which among other things, prohibits lawmakers from soliciting donations for their campaigns during a legislative session.  However, the Alabama Republican House Conference cash-call certainly violates the spirit of the FCPA because the session is not over yet.

What is the Alabama House Republican Conference, Inc.?
Even though it is raising big money from lobbyists and businessmen, and has Speaker Hubbard and his top lieutenants are the officers of the group, the invitation wants you to know the Alabama House Republican Conference is not a Political Action Committee. “AHRC is not a Political Action Committee and will not receive contributions or make expenditures, as defined by the Fair Campaign Practices Act, to or on behalf of any candidate or for the purpose of influencing the outcome of any election.”

There you have it. It is not a PAC, so nothing improper here folks… Move along.

In fact, the Alabama House Republican Conference is a registered a non-profit organization (whose directors are Speaker Hubbard, and Reps. Jay Love and Micky Harmon), given tax-free status because its mission is to “discuss” and “educate” the the public on “public matters.” See the Secretary of State record here: http://arc-sos.state.al.us/cgi/corpdetail.mbr/detail?corp=032173&page=name&file=

So, according to its organizers it is a nonprofit created for the public’s benefit…Like the Red Cross…Or the Big Oak Ranch for children.

Since the Alabama House Republican Conference Inc. is not a PAC and does not use contributions to support or oppose any candidate or to influence elections, what exactly tax-exempt activities will it perform with the tens of thousands of dollars Gold Sponsors and Silver Sponsors will surely pay for their private get-together with Speaker Hubbard and other lawmakers?
Surely, nothing improper, or of a partisan political nature.
No doubt co-director Micky Hammon will be holding statewide lectures on good, sober government. While Jay Love another director for the Alabama House Republican Conference Inc. is sure to be traveling the state giving inside tips to budding business owners the wonders of public/private partnerships.
And in time the donors to the Alabama House Republican Conference Inc. will be treated to personal visits from Speaker Hubbard, the next time there is a need to raise more money.
Oh, by the way, sorry if you didn’t receive an invitation, I didn’t get one either. I found mine in the dumpster (next to a copy of the state’s ethics code) well, sort of.