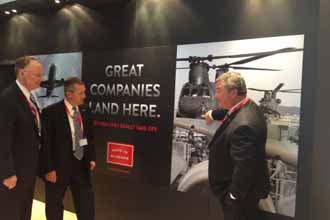 Alabama Governor Robert Bentley (R), Alabama Commerce Secretary Greg Canfield (R), and team are at the Paris Air Show to promote the state of Alabama and recruit more jobs to the state. Gov. Bentley addressed almost 100 economic development officials and local elected officials at a breakfast at the Paris Marriott.

Governor Bentley said on Facebook, “As more companies choose to locate and expand in Alabama, more jobs are created for the people of Alabama. Aerospace is one of 11 industry sectors that we identified as having tremendous potential for growth. The purpose of our visit to Paris is to promote Alabama as a solid choice for companies looking to build and expand.”

Bentley is promoting the state at the 50th Paris Air Show, a biannual aerospace and defense trade show attended by both companies and countries. Aerospace companies showcase their latest technology while talking business…including relocation and expansion plans.

Bentley said in an interview at www.madeinalabama.com that the state of, “Alabama has had tremendous success in transportation manufacturing and engineering. Some might think that began with the automotive industry – Mercedes, then Honda, then Hyundai. But in reality, it began with the development of NASA’s Saturn V rocket in Huntsville in the early 1960s. Because of Alabama’s history in aerospace, we have the expertise, the talent and the infrastructure companies need. So it’s a natural growth sector for us, and it provides the kind of high-tech, high-paying jobs that we are working to recruit to our state.”

Gov. Bentley said, “Without question, the Airbus facility opens up a new set of opportunities. We are very focused on building relationships with companies that could serve as Airbus suppliers and vendors. We want those companies to build their plants in Alabama and bring their job opportunities to Alabama. I want these companies to come to Alabama, not other states.”

Bentley said that the construction of Airbus’s newest assembly plant in Mobile reinforces the state’s position as a leader in the aviation industry. Gov. Bentley said, “We have had a significant presence with Boeing’s defense division for more than 50 years, and we already had major suppliers such as GKN and PPG on the ground. Now, we’ll be producing commercial jets as well, which was really the only big piece missing from the puzzle.”

Gov. Bentley said that he and Commerce Secretary Greg Canfield will be meeting with companies that already have operations in Alabama as well as several prospective projects. Gov. Bentley said, “We won’t be sharing any details just yet on those prospects, but I can tell you that I’m meeting with companies such as Safran, which recently announced a new operation at Mobile’s Brookley Aeroplex, UTC, which has a big operation in Baldwin County, Raytheon, GE, Boeing and, of course, Airbus. All of these companies are growing globally and represent potential new jobs for our state now and in the future.”

Gov. Bentley said that he expected to walk away with deeper relationships with decision-makers who will be key to future announcements. Gov. Bentley said, “The purpose of our visit to Paris is to promote Alabama as a solid choice for companies looking to build and expand. We have the best workforce of any place in the country. We have a positive business climate. We offer the tools that companies need to succeed. As more companies choose to locate and expand in Alabama, more jobs are created for the people of Alabama.”

Gov. Bentley said his top priority is creating jobs. “We are actively recruiting companies across the board.”

Bentley was elected vowing not to take a salary until he got the state back to full employment.