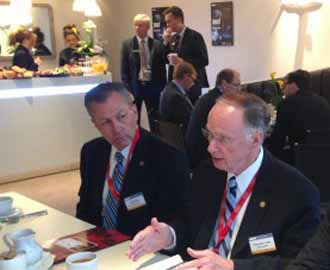 Last week, Governor Robert Bentley and an entourage of nearly 100 prominent Alabamians touched down in Paris, France, days ahead of the 50th Paris Air Show. The economic mission was described as an opportunity for Alabama economic development officials and local elected leaders to meet with aerospace companies in hopes of bringing jobs back home.

Bentley spokesperson Jeremy King said of the trip, “The purpose…is to bring more jobs to Alabama. Governor Bentley, Secretary Canfield and others are meeting with dozens of companies to discuss recruiting them to Alabama or helping them expand the operations they already have in Alabama.”

Alabama Speaker of the House Mike Hubbard took to his Facebook account to say he was in Paris with Governor Bentley and Commerce Secretary Greg Canfield to “Bring jobs to Alabama.”

But, really…how many public officials, staff members, spouses and other hangers-on are needed for the “economic development mission” that Team Alabama attends every year? And exactly how much will this “mission” set Alabama taxpayers back when all the airline tickets, hotel rooms, champagne lunches, etc. are added up?

Secretary Canfield misled the press on the actual cost of the Paris trip, telling AL.com that, “The delegation includes five people traveling on state dollars, plus security for the governor.”

Canfield declined to provide an estimate the cost of the trip to taxpayers. He promised an accounting of the costs at some time in the future.

Canfield’s assertion that only five people are traveling on taxpayer dollars leaves out the fact that several municipalities, other state agencies and a gaggle of lobbyists are all part of Team Alabama, present at the Air Show. The size of the Alabama contingent at the Air Show is much closer to 100 than the five people Canfield cited.

King, the governor’s spokesperson, said the “around 100″ number factors in the local economic developers, etc., who are also “working to promote their regions for job growth.”

The total of public taxpayer funds used to finance these individuals is spread throughout various municipalities and agencies, so a true account will be difficult to get from officials.

King confirmed that Commerce was responsible for expenses for the, “Governor as well as the First Lady, the Commerce Secretary, two additional representatives of the Department of Commerce and security for the Governor.” This includes Stefania Cumuze, Canfield’s Special Assistant.

Regardless of the cost to taxpayers, Team Alabama is making sure we all get to see and hear about how public dollars are being spent. Glowing reports and picturesque photography of the events were provided by Big Communications, a Birmingham-based public relations and advertising firm. The company, founded by John Montgomery, grew from “1 man in a loft to 38 people in 5 Points South in Birmingham, servicing clients all over the Southeast,” according to its website.

Montgomery has been personally on hand to photograph the governor and the members of “Team Alabama.” There is even a picture of one of Big’s executives with First Lady Diane Bentley, and one of Montgomery with the Eiffel Tower in the background.

A Big Communications spokesperson told the Alabama Political Reporter that an official with the company would respond to requests for information. The official never returned our calls.

When the Governor’s office was asked how much Big Communications was being paid to write stories and photograph dignitaries in Paris, King referred the question to Gerrianne Miller, communications manager for commerce. He gave the same response when asked why the state needed a PR firm at the air show.

Miller’s office said she was not at work on Wednesday and that other staff officials were still in France.

According to the daily news provided by Big Communication, the cities of Huntsville and Mobile had an “active presence” at the Air Show as well as Auburn, Opelika, Tuscaloosa, Andalusia, Montgomery and more. Big, also reported that Baldwin County Commission Chairman Tucker Dorsey, Daphne Mayor Dane Haygood and President of the Baldwin County Economic Development Alliance Lee Lawson were on hand for the receptions paid for by yet unnamed sponsors—as well as Montgomery Mayor Todd Strange.

These elected politicians are just a handful of the power elite to travel to the posh Paris Air Show.

Along with the receptions, a champagne brunch was provided for members of Alabama delegation at the famed home of King Louis IV, the Palace of Versailles. Julie Burge Lindsey – the mother of Canfied’s secretary – posted to her Facebook account. “OMG we were treated to a champagne reception before our picnic lunch a Versailles.”

At Château de Versailles, a member of the Alabama delegation wrote on Facebook, “we were allowed entry… into the private chambers and into Marie Antionette’s personal theatre.”

There were also posts about visits to the shops of Louis Vuitton and other famed French luxury Haute couture designers.

Does anyone remember a short few years ago when Freedom Fries replaced French Fries as a sign of Alabamians distaste for all things French? How ironic that a chance to cruise the Seine and stroll the wide sidewalks of the des Champs-Élysées, with its cinemas, cafés, and luxury shops, has given rise to a new group of Alabama Francophiles.

King said that Mrs. Lindsey was a volunteer and was not paid by the state. King did not give an estimate of how many volunteers had accompanied Canfield and the governor.

While the annual pilgrimage to Paris Air show dubbed, “the biggest junket there is,” did not begin with Bentley and Team Alabama, it would seem they have so far been the most successful and exuberant.