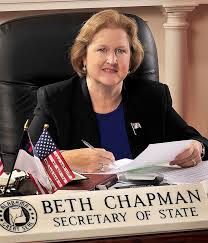 Alabama Republican Party Chairman Bill Armistead said in a written statement, “Secretary of State Beth Chapman has made her mark since taking over as Secretary of State following the 2006 election. Under the watch of Secretary Chapman, the office has implemented several changes to make elections in Alabama more efficient and transparent. Among Secretary Chapman’s initiatives have been to ensure that the votes of members of the military who are overseas are counted and to implement online campaign finance reporting for state candidates in Alabama.”

Alabama Governor Robert Bentley (R) told Al.com’s Chuck Dean, “I would just like to say what a fantastic job I think Beth Chapman has done as our secretary of state,” said the governor. “She particularly has been very interested in making sure that our service men and women had the ability to vote. She’s been a very good secretary of state. And I hate to see her leave.”

Alabama Governor Bentley will now appoint someone to finish the remainder of Sec. Chapman’s term.

State Representative John Merrill, Probate Judge Jim Perdue and Probate Judge Reese McKenny have announced they are running for the position, but the Governor has indicated that he is unlikely to appoint any of the candidates who have announced for the vacant position.

Sec. Chairman was term limited by Alabama law. Both Alabama Governor Bentley and Lieutenant Governor Kay Ivey (R) have announced that they are running for reelection.