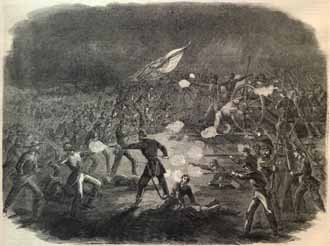 One hundred and fifty years ago, one southern army was throwing its best troops at Union lines that did not buckle under the weight of the Confederate might. Meanwhile, another large Confederate Army was trapped in Vicksburg and was slowly starving. By the Fourth of July, Lee’s Army of Northern Virginia was retreating back to Virginia in defeat and Lieutenant General John Pembroke’s broken force was surrendering to the siege of Vicksburg by rising Northern star Ulyssess S. Grant.

Most people in the know, thought that that week’s events would spell the end of the Confederacy. They were wrong, the South would fight on for nearly two more years, but the damage had been done and those losses could never be replaced while the Union Army was increasingly making the use of emancipated slaves as well as free Black men eager to join the union cause. That and the combination of greater industrial capacity made the end virtually inevitable.

On July 1, 1863, the 8th Illinois Cavalry, part of Brigadier General John Buford’s Cavalry Division fired on the forward elements of General Robert E. Lee’s Army of Northern Virginia outside of the Pennsylvania town of Gettysburg. Among the casualties that day was union Major General John Reynolds who went dangerously too far forward to personally reconnoiter the situation. By July 2nd most of General Robert E. Lee’s Army of Northern Virginia was locked in mortal combat with most of the Army of the Potomac under the new command of Major General George G. Meade. President Lincoln had just promoted Meade to replace Major General Joseph Hooker in the aftermath of the disastrous Union defeat at Chancellorsville. By day, three it was apparent that the Union which had successfully held the Confederate forces at bay were going to prevail. An exclamation point was added to the Union victory when CSA General George Pickett’s out manned force charged the Union lines. The Confederate attackers were cut to pieces. General Robert E. Lee still managed to extract his force from the field and fell back to Virginia, but the southern cause was never the same again.

Meanwhile 30,000 men of Lieutenant General John Pembroke’s force surrendered at Vicksburg after they and the civilian inhabitants of the small Mississippi town endured a grueling ordeal in which their force along with the town were surrounded by the forces of Major General Ulysses S. Grant’s Army of Tennessee. Grant’s forces lobbed over 22,000 shells into the city during the siege. Soldiers and civilians alike dug caves to hide from the shelling. The fall of Vicksburg and the subsequent fall of gave the Union control of the Mississippi River effectively split the Confederacy in half.

Today’s modern defenders of the Confederate States of America now point out with the clarity of 20/20 hind sight that what was lost on those eventful days 150 years ago was state’s rights. The federal government today collects the overwhelmingly largest share of the taxes in this country and dictates to the states everything from how many calories can be in a 6th grader’s school lunch, to whether a highway can disturb some endangered minnow or not, to whether a factory can be sited in a particular county or not due to arbitrary particulate and O2 concentrations set by the federal government. The South’s defenders today argue that a southern victory would have produced a Confederate States of America government with much less power than the large federal government we see today, delegating most decision making to the states.

Defenders of the Union today argue that the South seceded to defend slavery more so than states rights and that an independent Dixie would have institutionalized slavery well into the 20th Century. That combined with organized suppression of Black voting rights well into the late 1960s (until the federal government intervened to enforce equal protection amendments passed in the aftermath of the Civil War) means that a free and independent Dixie would have been a human/civil rights violator and no one should mourn “the Lost Cause” that was the Confederate States of America.

Whatever the truth, a lot of brave men died fighting 150 years ago this week and history was made on those days