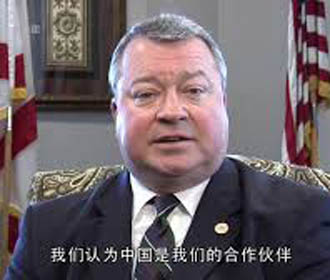 According to Commerce Secretary Greg Canfield, the contract with Big Communications, a Birmingham-based public relations company, is with the educational entity Alabama Industrial Development and Training (AIDT).

Canfield said that when Commerce was planning a rebranding for the state, he met with Ed Castile, head of AIDT, and they decided that Commerce would “piggy-back” on the AIDT marketing budget for the campaign.

The contract signed September 24, 2012, states it is for “professional services and public relations.”

The website design for Commerce is $99,000 with a “web skin” update for AIDT. For the almost $100,000, Big was to provide “Development, Design and Programming” for the new website.

Alreporter.com contacted a professional web-development company and asked that they give an estimate for duplicating the Commerce website, Made in Alabama at www.madeinalabama.com.

Big Communications charged the state $99,000 for the site.

Brain Swell Media, an award-winning website and webcasting firm from Augusta, GA, said they would build the same site for an estimated $7,500 to $10,000.

Last week, Alreporter.com sent an email to Sen. Bill Holtzclaw (R-Madison), chairman of the Legislative Contract Review Board, and asked him about the “professional services” contract that Big had signed with AIDT. Holtzclaw, emailed back saying, “Thanks for the heads up and placing this on my radar. I spoke with Sec. Canfield this morning to clarify the AIDT contract and the Contract Review process.” However, the senator did not offer to clarify the contract for us. A second email was sent to Holtzclaw seeking further understanding about the contract but that email has gone unanswered.

Emails were sent to the members of the contract review board, but the only member that responded was Sen. Paul Sanford (R-Huntsville). Sanford said, “I believe it should have been put out for bid personally. Advertising is not typically considered a professional service contract.”

Ed Castile said that AIDT decided to sign the contract under the professional services code, which he said was permissible under state law.

Canfield said that Big was the only company that could do the work.

Another large items that Big was to deliver to Commerce was “creative production.” For creative production, the taxpayers of Alabama paid $125,000 for “Collateral Material – Informational material, documents…” [to fit] “…the [Commerce] Department’s new identity.”

Big is also charging $140,000 for “Public Relationship.” According to the contract, PR consists of “The creation of a brand identity, online presence and accompanying visual elements…[that lay] the foundation for a smart, strategic external communications strategy.”

According to Canfield, Alabama needed to rebrand itself so that it could compete with other state’s for international business.

AIDT was an arm of the Alabama Community College System until Gov. Robert Bentley, by executive order, placed it under the Commerce Department in 2012. During the 2013 Legislative Session, the move was codified into law. AIDT is funded from the state’s Education Trust Fund.

Alabama businesses exported to 189 countries in 2021, reflecting the vital connection that the state’s high-quality, in-demand products have to the global economy.