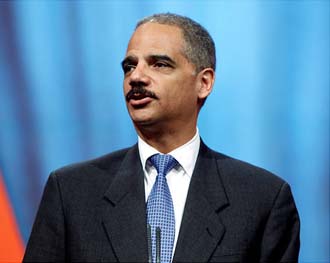 On Thursday, U.S. Attorney General Eric Holder (D) announced that the U.S. Department of Justice will sue states (who like Alabama) have passed mandatory voter ID laws. The Speaker of the Alabama House Mike Hubbard (R) from Auburn quickly responded to the possible threat of more federal litigation being levied against the state by Obama’s Justice Department.

Speaker Hubbard said on Facebook, “Today, Attorney General Eric Holder announced that the Department of Justice will be bringing lawsuits to prevent states from implementing election laws, including voter ID legislation, as well as requiring certain states to “pre-clear” these laws, despite the Supreme Court’s ruling that this practice was outdated, selective, and unconstitutional.”   The Speaker continued, “Obama’s out-of-control Justice Department is once again doing an end run around the U.S. Supreme Court and the legislative process in order to implement its unconstitutional, liberal agenda. Rather than working to protect the ballot box, Eric Holder wants to personally hold the door open for voter fraud by opposing Alabama’s photo voter ID requirement and others like it. In case Holder did not get the memo, the Justice Department was created to work against those who seek to break the law, not help them commit their crimes.”

Alabama Attorney General Luther Strange (R) spoke told WSFA 12 News that Alabama would be ready for any action levied against it by Attorney General Holder. AG Strange said of Alabama’s voter ID law, “No one should have to do anything more than is required by law. I think the law is very fair. I think it makes common sense. Most people understand that a picture ID is just common sense required in so many other parts of our life. Certainly I see no problem asking for that in the context of casting your vote.”

Strange said on his campaign website, “This is just one more instance of the Obama Administration and Eric Holder ignoring our system of checks and balances when it doesn’t get its desired result. Attorney General Holder completely dismisses the progress made by Alabama, Texas and other southern states over the last fifty years.”

Attorney General Eric Holder said Thursday that the Justice Department be joining in a lawsuit against the state of Texas challenging their voter ID law and suggested that the DOJ may be taking aggressive action against other states.

AG Strange said on Twitter, “AG Eric Holder may try to do an end-run around the U.S. Supreme Court, but we’ll be ready.”

At issue are state laws which require that voters present a photo ID when they come to the polls. Republicans claim that this is necessary to prevent wide spread voter fraud, like the recent instance in Uniontown where more people cast ballots than actually live in the town. Republicans say that photo ID is a common sense reform to prevent voter fraud and is not a difficult burden for anyone to achieve.

Democrats claim that their voters tend to be poorer, less educated, and less likely to actually have a photo ID and that asking them to get a photo ID of some form is too harsh a burden.