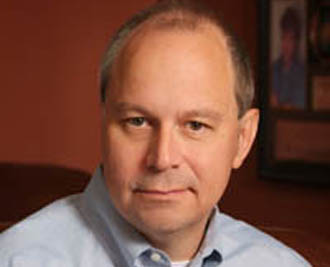 Davis told the members that the implosion of the ‘Birmingham News’ was the dominant issue in the local news business.  Davis said that it has been less than a year since Alabama’s largest newspaper went from seven days a week to just three days a week and at this point he wondered if the three day a week paper would remain a year from now.

Davis said that the next three election cycles are very important for this country.

Davis said that other publications and news sources are moving in and taking up the slack.  Davis said that the ‘Tuscaloosa News’ now has more news about Hoover than the ‘Birmingham News’ does.

Davis said that local talk radio is currently in a state of flux.  Management level decision makers made incorrect decisions to moderate their formats after President Obama was re-elected in 2012 and he himself has been a casualty of that trend.

Davis said that radio stations are trying to be less controversial.  “They almost are imposing the ‘Fairness Doctrine’ on themselves,” but it has gotten to the point locally that they are literally doing shows about Fourth of July barbecue recipes.

Davis said that the demise of the ‘Birmingham News’ and questionable format decisions on local talk radio stations have only continued the movement toward the internet.

Davis said that the next casualty will be TV news.  Station managers would rather cover non-controversial topics like celebrity news and fluff than do in depth coverage of actual news issues.

Davis predicted that there will be more and more movement away from traditional media.  Of the three traditional news sources Davis said that local talk radio has the best chance to survive.

Davis said that the Washington Post sold for just $200 million shows us the state of newspapers.  For many years it was the standard for investigative journalism now it changes hands for roughly the value of a good second baseman.

Davis said that he talked with Andrew Breitbart shortly before his death and Breitbart said that ‘Politics always follows culture.’  Conservatives often get that backwards.

Davis said that gay marriage is a good example.  “I never thought we would get to the point where if you believe that marriage is a sacred bond between a man and a woman you would be on the defensive. ”  Davis said that ABC made the decision 15 years ago with ‘Will and Grace’ that they were going to show homosexuality as another decision like vanilla or chocolate ice cream and we are seeing the cultural changes that resulted from that.

The somebody like Obama could get elected in the first place shows how much the culture has changed.

Davis said that the miniseries about Hillary Clinton is a lot like the favorable coverage that John Glenn received from ‘The Right Stuff.”  Everybody at the time thought that that would propel the astronaut turned Democratic Senator to the White House: it didn’t and Davis thinks that it won’t be enough to overcome her incredibly poor record as Secretary of State.  What she didn’t deserve is Diane Lane playing her.  We have to assume that Hillary is the Democratic nominee.

Davis said, “It is kind of sad to see where NBC news has evolved to.  They made an editorial decision to become a left wing advocate.”  Davis said that he expects to see more polarization in news.

Davis told that gathered group of conservative leaders, “One mistake we have made is that we have all come to the mindset that everybody watches Fox News.”  Fox may dominate the ratings of news cable networks, but Fox is a small percentage of overall viewers.

More people watch ‘Dancing with the Stars’, Kareem Abdul Jabar’ jumping off of a diving board, or what’s left of ‘American Idol’ than watch Fox News or listen to conservative talk radio.  So many people out there don’t watch Bill O’Reilly…..or the liberal news shows.  We need to figure out how to reach those people.”

Daivs said that is favorite news web site is RealClearPolitics.com out of Chicago.  It takes the best of the day on both the left and the right.  Davis said that he doesn’t do World Net Daily and similar sites.  “
I try not to go down rabbit holes.”  Davis said that his favorite columnist is Charles Krauthammer.  Amy Stoddard with the Hill.com is a very good friend.  He also like Investors Business Daily and the ‘Detroit News’ has very good editorial page.  Davis said that George Will is a good read and so is Walter Williams.

On the 2014 Senate midterms Davis said, “I am scared to death that there is a lot of missed opportunities like 2010 and 2012.  “We have done a terrible job of recruiting candidates.”

Davis has hosted or co-hosted numerous radio shows and was most recently a talk radio host at 101.1 FM.

Davis said that as we choose our candidate we have to look at the electoral map.  Romney only flipped North Carolina and Indiana.  Neither should have ever gone Democratic.   To win Republicans need to flip back Ohio, Florida, Virginia, steal Michigan and have got to compete in Nevada, Colorado, or New Mexico.  “I don’t see Rand Paul or Rick Santorum doing that.”

Davis said we need to come up with a new package.  The candidate who can break the mold Davis said is Suzanna Martinez the Republican Governor of New Mexico.  Even her position on immigration will surprise you.  “She can get tough on immigration and you can’t call her a racist.”

Davis said that we lost the culture war was when we got timid about values.

Davis predicted that Alabama will play Ohio State in the BCS national championship game, the Atlanta Braves will win the World Series, and the San Francisco Forty Niners will play in the Super Bowl.

The next meeting of the MARC will be on September 14th.

The Republican Women Of the South announced that they will have Condoleeza Rice at their Luncheon on December 19th at the Vestavia Country Club. Sponsorships are still available.

Alabama Eagle Forum announced that there will be an informational forum on Common Core at the Briarwood Presbyterian Church sanctuary on Friday 16th from 7:00-9:00 pm.