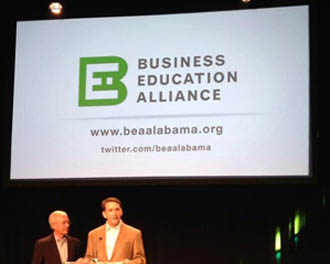 MONTGOMERY—Last weekend, republican legislators, lobbyists and top business leaders gathered at the posh Grand Hotel in Point Clear to enjoy a “unique networking opportunity to discuss politics and policy with friends and colleagues in a beautiful, informal and relaxed setting,” according to the Business Council of Alabama (BCA) website.

Along with promised golf outings and fine dining, the conference served up speeches by publisher and writer Michael Hyatt, political analysts Charlie Cook and Gov. Robert Bentley. But by all measures, the jewel of the weekend was the announcement of the formation of the Business and Education Alliance (BEA).

A “non-partisan advocate for education programs with proven track records and results both here and nationwide,” according to the groups finance chairman Jay Love. Love recently resigned his State House seat to work on “education reform.”

The new group will be headed by former state school superintendent Joe Morton.

The foundation is listed with the Secretary of State as a non-profit, charitable organization, whose mission is charity or education.

Several people at the event laughed at the notion that the BEA was non-partisan, being founded by BCA boss Billy Canary.

BEA was incorporated by Canary and Hardwick C. Walthall of the law firm Maynard Cooper & Gale on June 16, 2013. Canary said of the organization he incorporated, “We support the BEA’s desire to be both pro-business and pro-education. In the end, we share a common goal: Excellence in education.” However, Canary has been a constant opponent of public education in Alabama seeking to replace it with charter schools, distance learning and other forms of privatized education.

Most notably, he had worked along side House Speaker Mike Hubbard to destabilize the Alabama Education Association (AEA).

Of the many texts transmitted during the announcement of the newly formed BEA one read, “This is a direct attack on the AEA.” But, the announcement was greeted by many republican lawmakers as a “great day for education” echoing the same rhetorical jubilance as when the Alabama Accountability Act was passed.

Even Gov. Bentley, who was widely supported with money from the teachers’ organization, praised the founding of the group saying, “[BEA] is exactly what we need” in Alabama. Those close to the Governor said he was referring to the BEA’s promise to work with his College and Career Task Force initiative.

However, many educators see this as just one more instance in which the Governor has joined forces with those who seek to wreck public education in the state.

The new Chairman of BEA, Joe Morton, in the past has been accused of being “openly hostile” to public educators. This is because of “his record of recommending that teachers lose their certificates for various types of misconduct,” according to an AP report.

During his tenure as superintendent, Morton also funneled millions in education dollars to Learning Through Sports, Inc. The software company received $13 million from an “at risk” fund controlled by Morton.
Learning Through Sports Inc. was founded by Brian Shulman, a former Auburn football player, and Auburn Network Inc., a multimedia company owned by Mike Hubbard.

Those donors funding the alliance are hidden from public scrutiny under the veil of the organization’s non-profit status. Love’s years as chairman of the House Ways and Means Education Committee should leave him with many friends to call on in his new position.

Marlowe has served as the organization's interim executive director since 2019.

The AEA said it has learned from numerous members that this practice is happening all too often, and it’s placing lives at risk.