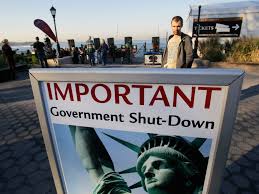 The partial government shutdown enters its third day and there is no end in sight. Republican efforts to gain concessions have been rebuffed by President Obama to this point.

Seventh District Republican Candidate for Congress, Matt Jenkins blames the Democrats for this man made crisis. Jenkins said in a written statement,

“Another year and no Constitutionally mandated budget by this President and the Democrat leadership. This partial government shutdown is but yet another example of this Presidents failed leadership ability.”

Jenkins continued, “The Democrat’s in the House and Senate will have the American people believe that women and children will starve and it is the end of the world as we know it in America today. It is not. Nobody is going to starve and America will not be invaded by hoards to devour us.”

Jenkins concluded, “I want to make it clear that this shutdown did not have to happen. Had President Obama and his parrots repeating the Democrat talking points in the House and Senate simply been willing to sit down with the Speaker and Senate Republicans, this shutdown could have been worked through. For five years this President and the Democrat controlled spending machine have operated this Nation with no budget and this is but just another example of their inability to manage our Nation. It is time for a change in Washington, D. C. and it is time for true leadership and maturity to once again lead this great nation back to prosperity.”

“The government shutdown is the sole creation of the House Republicans. The GOP had a chance to avert the government shutdown but chose political brinkmanship over responsible compromise. In order to avoid the shutdown, the Senate sent the House a compromise spending bill that accepted the GOP’s lower funding levels. Instead of allowing a vote on this clean Continuing Resolution, House Republicans once again attached unreasonable amendments which had no hope of gaining bi-partisan support. Enough is enough! We cannot continue playing ping pong with the well-being of the American people.”

Rep. Sewell is the only Democrat and the only minority in the Alabama Congressional delegation. Sewell is currently serving her second term in the United States Congress.

Jenkins says that he is running because the Seventh District has the highest unemployment rates in the State. Jenkins said, “It’s time to get all Alabamians back to work. Our elected officials have done an outstanding job attracting the World to Alabama, but we can do better. Once we begin to improve the infrastructure in Birmingham and throughout the Black Belt Region, we will be able to attract more businesses to provide real jobs for hard working Alabamians.”

Jenkins said that he wants to help young people out who are transitioning out of college into the work force. Jenkins said that he opposes increasing student loan interest rates and opposes the controversial common core standards which he called a disaster.

Many political pundits believe that District Seven was drawn to be majority minority and that given the tendency of Black Americans overs the last 49 years to vote Democratic no Republican can win in the Seventh District.