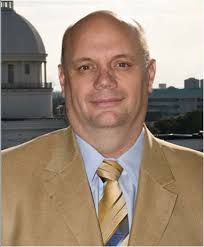 On Thursday, October 10th Public Service Commissioner Jeremy Oden (R) addressed a crowded audience at the Greater Birmingham Young Republicans meeting at the Fox and Hound near the intersection of I-459 and U.S. Hwy 280.

Oden was appointed to the Alabama Public Service Commission (PSC) by Governor Robert Bentley (R) in December when then PSC member Twinkle Andress Cavanaugh vacated her position on the Commission to accept the Presidency of the Commission which she won by unseating then incumbent President Lucy Baxley (D) in the 2012 election.

Oden said that he grew up in the Cullman area around Vinemont. His was a family of farmers and small business owners. Like the young Republicans of today, Oden said that he was active in Republican politics as a young man, but back then Alabama was still controlled by Democrats. Oden ran for the state legislature in 1984 and won four years later.

His House District 11 included parts of Cullman Morgan and Blount Counties. Oden said that he was one of the first Cullman Republicans to be elected after Guy Hunt and he has seen a lot of good changes since then as the state has moved from being a Democrat state to a Republican state.

Oden admitted that as a state legislator a lot of us didn’t know what the PSC actually does. Gov. Bentley asked him to take the job and he agreed.

Starting in the 1980s the state deregulated telephone companies, the railroads, and trucking became a federal regulatory issue. By 2006, the primary companies being regulated by the PSC were Alabama Power, Alabama Gas Company (Alagasco) and Mobile Gas. The PSC still inspects the railroads in the state and regulates the oil and gas pipelines for their economic feasibility and safety.

Oden said that very few people paid close attention to the PSC until the formal revue versus informal review issue on rates that came up early this year.

Oden and Commission President Cavanaugh voted to go informal, but Commissioner Terry Dunn (R) wanted a full formal review process. Oden said, “A lot of people did not know who we were until it got in the papers.”

The issue thrust the PSC into the spotlight. Oden believes that he and President Cananaugh made the right decision. Oden said that the PSC looks at the rates and determines based on experience whether the company is reliable or not.

Oden said that he and the PSC President have created a combination process that is both a formal and informal process. Testimony is under oath and regular citizens can still participate without having to go through the complex deposition process of a formal review.

Oden warned that there is a huge movement in this country commonly referred to as the war on coal, but they won’t stop there. They are going into trying to stop actual energy production.

Oden said, “We use a very cheap easily obtainable product and that is what we set the backbone on and that is coal.”

Oden said that the informal process lets us keep the discussion on rates.

Oden said that when we look nationally we have a President who has his own group. His campaign group was converted into a national campaign. Groups like the AARP, Sierra Club, and SELC are down here at the review meetings trying to push their agendas.

Commissioner Oden said that Georgia started this process two years ago. They are now shutting all of their coal plants down and going to nuclear and natural gas and Georgia power rates have begun to increase.

Oden said that when you start moving away from your major energy source you create new costs and that you need to understand energy production.

TVA started moving away from coal and then asked for a rate increase.

Oden said that the backbone on energy in Alabama is a combination of coal, natural gas, nuclear and hydro-electric.

Oden said that as a residential customer you want the cheapest power source you can get. High power rates would also hurt our ability to recruit new jobs or keep the ones we have now.

A high rate of energy cost means they will not come to Alabama. Oden said that California is where the environmental extremists have been most successful and no one will locate a major manufacturing plant in that state any more because of the excessive energy costs,

The cost of energy is the #1 or #2 factor in why many plants choose a site to re-locate too.

Oden said that the environmental extremists want to add alternative energy to the mix. Oden said that
there are only two places in Alabama where wind is even feasible and producing electricity through massive solar plants is too expensive. Many times of the year, Alabama has little to no wind and when the wind is blowing it is usually blowing in a storm.

Oden warned that the PSC has been attacked for the last year by the environmental extremists and that they are moving to influence the state legislature and are beginning to attack other industries.

Jeremy Oden is seeking another four years on the Public Service Commission in the 2014 elections. He currently has no announced opponent.

Afterwords, Alabama Young Republicans Chairman Clayton Mark Turner said on Facebook, “Enjoyed hearing from Commissioner Oden tonight. He gave a great background on the PSC and their role in our state. Hearing that it’s not just energy industry related jobs that are affected when over regulation occurs but business investment that affects all Alabamian jobs really hit home with me. Young people are most affected by the possibility of an economic downturn. It’s vital for us to continue having these discussions to promote economic growth in our state.”