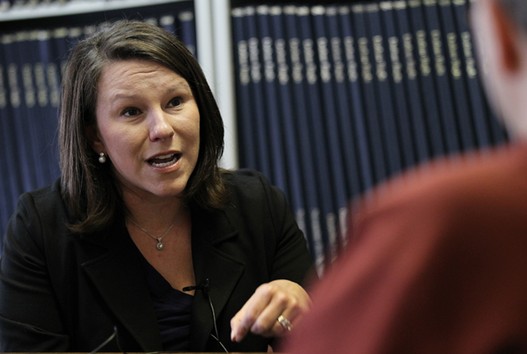 Congresswoman Martha Roby (R) from Montgomery said in a written statement, she could not support a Senate-concocted deal that increases the nation’s debt limit by half a trillion dollars with no reforms to spending. Rep. Roby said that the whole shutting the government strategy was ineffective and only weakened the Republicans’ bargaining position.

Rep. Roby said in a written statement, “Despite my fierce opposition to ObamaCare, I have always been honest with my constituents about the improbability of repealing or defunding the law until Republicans regain control of the Senate and eventually the White House. Throughout my August and September district visits, I repeatedly warned that shutting down the government over ObamaCare was a poor strategy. I said it wouldn’t work because the sheer numbers in the Senate aren’t in our favor and Republicans don’t hold the White House. I said it would backfire, costing Republicans our momentum and damaging our prospects for the future.”

The conservative congresswoman said that she can not support the plan to re-open the government. Rep. Roby said, “I strongly believe we must act to avoid defaulting on our debt payments and reopen the government. However, I cannot support a plan that increases our nation’s debt while offering no spending reforms. Washington’s addiction to spending is what led to this mess, and piling on more debt while ignoring the spending problem is exactly the wrong approach.”

Rep. Roby said, “A better way forward would be honest, simple legislation that takes care of our debt needs with corresponding spending reforms, provides temporary government funding, and allows us time to work toward a real budget. I know a majority of Republicans and Democrats would ultimately support such a plan. The problem is the ‘shutdown strategy’ damaged the House’s bargaining power in these negotiations.”

Rep. Roby said, “I hope conservatives can now regroup and begin work on achievable priorities that are important to regular Americans: striving to protect Americans from ObamaCare’s harmful mandates and taxes, setting sustainable spending levels that continue to drive down the deficit, and pushing a pro-growth agenda that will help create jobs for people in Alabama and throughout the country.”

The Senate overwhelmingly passed the plan 81 to 18 that allows President Obama to borrow more money and reopen the government then recessed until October 28. The House followed on Wednesday voting for the bipartisan plan by a margin of 285 to 144.

The 16 day shutdown ended with what was essentially a Republican capitulation. President Obama (as most people expected) did not agree to delay the implementation of his unpopular 2010 Affordable Care Act and did not agree to any sort of entitlement or spending reform. At the end of the day Republicans in Congress were not willing to allow the government to default and to raise the debt ceiling and reopen the government meant doing a deal with Democrats who held firm in their demands that they the administration be given the money with few strings attached. Under the deal passed by the Congress on Wednesday, spending will continue unchecked for the next several months and then in February the Congress will be asked to increase the federal debt which stands at $16,964 billion and climbing.

The national debt has surged to $17 trillion even though the Great Recession ended four years ago. The deal funds the government until January 15th and sets a new debt ceiling of $17.5 trillion and is expected to be maxed by February 7.