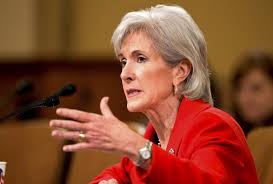 Today a combative Health and Human Services Secretary Kathleen Sebelius (D) testified before a Congressional Committee on the many problems plaguing the rollout of the Patient Protection and Affordable Care Act, nicknamed “ObamaCare” by friends and foes alike.

“Kathleen Sebelius continued to give the American people the runaround today. The ObamaCare website was down even as she testified, but Sebelius claimed it had never crashed. She has no information on enrollment numbers, she couldn’t even confirm if the ObamaCare website had proper security measures in place to protect a user’s personal and financial information!”

Senator Richard Shelby (R) from Alabama went even further. Alabama’s senior Senator told What’s Now Politics, “Secretary Sebelius needs to go; not because of a bad website, but because she helped to put together a terrible law.”

Congressman Spencer Bachus also remarked on Wednesday’s testimony by Department Health and Human Services Secretary Kathleen Sebelius to a House committee. Representative Bachus said, “The problem with Obamacare is not just a malfunctioning website. Even if that is eventually fixed, the fact remains that the fundamental structure of the law is flawed. It is raising costs, with many people facing higher health care premiums, causing policies to be canceled altogether, and it will lessen the overall quality of health care.” Rep. Bachus reiterated that he feels that the only way to fix

Chairman Armistead said, “When asked if the President is responsible for the train wreck rollout, Sebelius answered, ‘Whatever.’ Why is the President not taking responsibility? Why doesn’t anyone in the Obama administration seem to be taking this seriously? Over 87,000 Alabamians were recently notified that their insurance plans would be dropped at the end of the year. A million more people across the country are hearing the same.”

Congressman Mike Rogers (R) from Saks said, “The law hurts folks across East Alabama because it is not affordable or fair. Insured people are willing to become uninsured and pay the fine because they cannot afford the escalated prices of their new premiums under Obamacare. This new law, along with its website, has proved once again to be a ‘train wreck.’ President Obama has already delayed portions of the law, and Republicans are beginning investigations into its many shortcomings. I fully expect those hearings to reveal yet more problems.”

Chairman Armistead concluded, “As I said earlier this week, the buck stops with you Obama. The people of Alabama, and the rest of the nation, deserve answers and solutions immediately.”

While Republicans continue to harp on the unpopular law’s shortcomings implementation of the controversial legislation continues to trudge along, albeit “glitch” plagued. Recent poll numbers indicate that the troubled Obamacare rollout is having an effect on President Obama’s poll numbers. In a recent NBC/Wall Street Journal poll only 42% of the public approves of the President’s job performance……down 5% from earlier this month. 51% disapprove of the President’s job performance (tied for his worst poll number ever). 52% of the public now support either a major overhaul or a complete elimination of the President’s signature piece of legislation.

On Wednesday, even Sec. Sebelius admitted to Congress, “In these early weeks, access to Healthcare.gov has been a miserably frustrating experience for way too many Americans.”