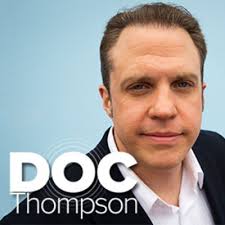 Last week, Doc Thompson and his co-host Skip McComb addressed the Rainy Day Patriots at their November meeting at the Homewood Library.  Doc Thompson is the host of ‘The Morning Blaze with Doc Thompson Show’ which airs from 6:00 am to 9:00 am before the Glenn Beck Radio Program.  Doc Thompson’s show promotes conservative libertarian principles with emphasis on free market principles.

Thompson said, “We bring greetings and blessings from Glenn Beck.”  “Politics is not all local anymore.”  Thompson said that Beck himself can not go out and attend these kinds of meeting anymore because he is too much of a target.  The death threats and threats to his family that Beck receives daily would require so much of a security detail to make it too difficult to do, so Thompson and McComb tour the nation on his behalf.

Thompson said that when he was hired by Glenn Beck, “Glen said there are only two rules ‘Be True and entertain.’”

Doc Thompson criticized the rollout of Obamacare and especially the healthcare insurance navigators  the administration is hiring to sell the new healthcare insurance policies.  Thompson said, “These people are horrible.  There are higher standards at McDonalds.”  They take two weeks of training from a 200 page manual and the standards are so low that the administration allows convicted felons to be navigators.

Thompson said that New Jersey Governor Chris Christie (R) is the “Same as the other people.  Who cares,” showing that the move to elect a moderate in 2016 will be opposed by the conservative talk radio show.

Thompson said that Beck, “Can be a little intense at times.  We sat with him for three hours while he told us how the world is going to come to an end at 30,000 feet,” while riding with Beck on his private jet.  Thompson said that when we landed Beck said that is just one possible scenario.

Thompson said, “We are actually in a good position right now.”  The Obamacare rollout was bad and “We knew how bad it is going to be, finally other people are realizing it.”  Thompson said of people who have just realized that Obamacare is bad, “Thank you welcome to our nightmare.”

Skip McComb said that a lot of people supported the idea that the Patient Protection and Affordable Care Act of 2010 would insure the uninsured…..now they find out that they are paying for it.

Thompson said, “We (conservative talk radio) stopped Syria from being bombed.  There are worse regimes (than Syria) tall over the world.”

Skip McComb said of the agreement to avoid escalating the Syrian Civil War, “We are looking to Vladimir Putin for advice on world peace?”

Thompson said that there are still revelations to be made in the IRS scandal.  “A lot of people are working on this.”

Thompson told the tea party members in attendance, “You are not some small group.  You are here at every stop.”

Thompson said that Glen Beck is building a new television and radio studio in Dallas.  That will give him an infrastructure to create television shows and even feature length movies.

“America is a conservative country.  They just don’t want you to know  that.  Most people feel like you do. The media just does not let it out there,” Thompson said.

The pair were also critical of the Transportation Safety Administration (TSA), “Dealing with TSA is one of the least  favorite things we do.  Skip plays good traveler and I play bad traveler,” when the duo go through airport security. Thompson said that he opts out of the full body scanners and then goes out of his way to make the TSA pat down difficult.  “The TSA gives us the illusion of security instead of real security.”

McComb showed a kids’ junior TSA officer badge that TSA is giving children as well as TSA stickers.  “They are making the kids junior officers.”

Thompson said that an officer was shot in a gun free zone.  Everybody then says arm the TSA.  “I have no problem with arming TSA agents but what about the rest of us?”

Skip McComb said when 18 kids are killed in a school the message is we need fewer guns.  When one TSA agent gets killed the response is to arm them.

Thompson said that the pair worked together for two years in Detroit.  Currently the two broadcast out of Dayton Ohio, because Thompson’s wife works on TV in Dayton, but they are probably moving to Dallas after the first of the year as Beck is consolidating his operations in the Dallas area.

Local talk radio host, Michael Hart, who emceed the event, said that if 20% of the social conservatives who don’t vote did, then we wouldn’t be having the conversations about social issues that we are having now.

Hart said that he gets a lot of positive feedback from listeners about how organized he is with stories and topics. Hart confessed, “Most of the time I steal it from the Blaze.”