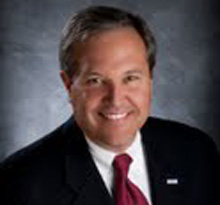 Mike Ward said, “Working with key leaders from the Tennessee Valley, I’ve been privileged to help support Redstone Arsenal through my work with the Chamber for more than 20 years. That work has included support for our community’s BRAC efforts since the mid 1990’s. I am very familiar with the process and look forward to supporting the other military installations in the State as we face potential future rounds of BRAC.”

Lt. Gov. Ivey said, “Mike possesses a deep understanding of the importance of reinforcing Alabama’s role as a good host to the military. The goal of the Commission and Foundation is to cultivate a military-friendly environment so that missions carried out in Alabama, stay in Alabama. I am confident he will serve as an effective leader and look forward to continuing to work with him.”

The MSF is a private, non-profit organization that was established to serve as the day-to-day operational arm of the MSC. The two organizations work together to develop and implement measures to retain and strengthen Alabama’s military assets in the face of any potential cuts due to the impending next round of Base Realignment and Closure Process (BRAC).

Ward is currently the Vice President of Government Affairs for the Huntsville/Madison County Chamber of Commerce and has served as a member of MSF since it was created in 2011. Ward replaces Brigadier General Paul Hankins (Ret.) who was formerly the Commander of the Air Force Officer Accession and Training Schools. Ward’s term continues until October 2014. Ward has a degree in Business Administration from the University of Alabama. Ward and his wife, Cathryne, have three children.

A new round of BRAC cuts appears inevitable due to steep cuts in the Defense budget combined with a greater portion of the Defense budget going towards veterans benefits leaving fewer dollars for operations and the active force. Defense spending is only 20% of federal spending; but Defense has received 40% of the sequestration cuts. Sec. of Defense Chuck Hagel has recently proposed cutting military pay and befits in order to limit the hollowing out of the force. Alabama officials hope that they are able protect the state’s military bases and pick up units and operations from bases that close in other states.

Rep. Martha Roby (R) told the ‘Dothan Eagle’ earlier in the year, “Now is a crucial time for our military. The ever-changing landscape means more uncertainty for our warfighters and policymakers at the Pentagon. It is as important as ever that the House Armed Services Committee fulfills its military oversight role and make sure we provide for the common defense of this great nation.”