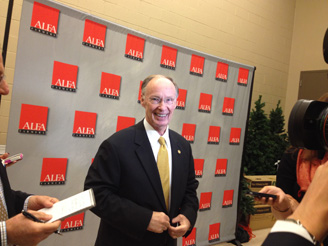 MONTGOMERY—Last Friday, Gov. Robert Bentley addressed more than 1,300 farmers from across the State for the Alabama Farmers Federation’s 92nd annual meeting in Montgomery.

Bentley praised the farmers for being a big part of the State’s economic drivers and job creators. He compared his own work life to that of an Alabama farmer:

“I work like a farmer…get up early and work till late,” said Bentley, who then continued to recount the accomplishments of his administration.

“We decided from the beginning that we were going to make government more efficient…streamline…save money, not raise taxes on the people of this State. That is a commitment I made and it has paid off,” said the Governor.

The governor reiterated how important the farm industry was to the State and that promoting Alabama agricultural was a part of his newest program called, Accelerate Alabama.

Public Service Commissioner Jeremy Oden was also at the event and agreed with the Governor assessment of the importance of agriculture in the state: “Statewide politics has to look at agricultural as the number one business we have in the State of Alabama,” said Oden, “…agriculture represents 20 percent of the work force in the State.”

Oden who is from Cullman County says that the Governor is on the right path by promoting the promise of agricultural in the State.

In this article:ALFA, Robert Bentley