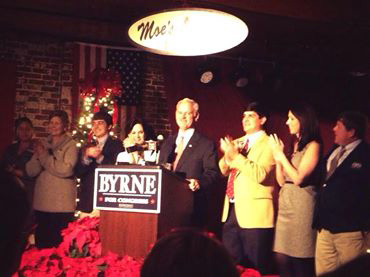 Forty one months ago, Bradley Byrne (R) was defeated by Robert Bentley (R) in the 2010 Republican Primary runoff for the Alabama Governor’s office.  On Tuesday, voters in Alabama’s First Congressional District went to the polls and sent Byrne to Congress.

Former State Senator Bradley Byrne (R) from Montrose faced Burton Leflore (D) from Mobile for the office vacated by Representative Jo Bonner (R) from Mobile.  Tuesday’s vote ends seven months of hard campaigning that has seen upwards of eleven candidates campaigning for the hearts and minds of the people of South Alabama.

Bradley Byrne told supporters at his victory party, “You all have told us loudly and clearly you want a conservative reformer in Washington who is there to get real results for people. Not fight and not name call, but to get real results. Fight hard against the Washington establishment holding our nation back. We are a great country but we are not acting like a great country in Washington.”

A Republican landslide in South Alabama could be a bad omen for Democrats chances in 2014.  The first Congressional District has been in Republican hands since the early 1960s, but Leflore insisted that voters wanted change.

Byrne won convincingly despite being battered by Republican opponent Dean Young from Orange Beach during the Republican runoff election.

U.S. Representative Martha Roby (R) from Montgomery congratulated Bradley Byrne on being elected to represent Alabama’s 1st Congressional District in the U.S. House of Representatives. Rep. Roby said in a written statement, “Congratulations to Bradley Byrne for his impressive victory tonight.  I know Bradley will add great value to Alabama’s Congressional delegation, and I look forward to serving with him.”

Rep. Roby continued, “Alabama’s 1st District has sent many great statesmen to Washington, including my friend, Jo Bonner. We all miss Jo, but I know Bradley will work to continue that legacy for South Alabama.”

Republican Representatives Roby, Aderholt, and Brooks came to Byrne’s aid with public endorsements and campaign money during the Republican runoff when Young had momentum and some polls even had the former Roy Moore (R) aid with a lead.

Representative Robert Aderholt (R) from Haleyville said on Twitter, “Congratulations @BradleyByrne on continuing the tradition of fine statesmen that #AL01 has sent to Congress; a good man to fill big shoes.”

Speaker of the House John Boehner (R) from Ohio welcomed Byrne to the body on Twitter.  Boehner tweeted “congrats @BradleyByrne welcome to the people’s house.”

Rep. Eric Cantor tweeted to Byrne, “Congratulations, looking forward to working with you.”

Byrne said on his website, “There is little doubt our nation and our region face many challenges but we also enjoy abundant opportunities. I run for this office as a person who truly seeks real solutions to our problems and I am more than excited to have an opportunity. I intend to be a part of the effort to realize the promise of our nation and our area.”

Byrne will be sworn in next month and one of the first duties the new congressman has to do is to get his congressional offices up and running again.

Congressman Bradley Byrne will have to face re-election next year and Byrne could face a Republican Primary opponent on June 3rd.