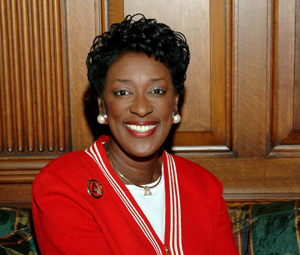 On Friday, December 20 the Alabama State University Board of Trustees chose ASU alum, Dr. Gwendolyn Boyd to serve as its new president.

Alabama Governor Robert Bentley (R) presided over the meeting at the historically Black college in Montgomery.  Gov. Bentley said in a statement afterwards that, “I think Dr. Boyd will make a great president. She has my full support and I will not interfere unless asked.”

ASU Board of Trustee Chairman Elton Dean said, “We are proud to have selected an accomplished, capable, nationally recognized leader with the skills and experience to move Alabama State University forward.”  “Dr. Boyd is the embodiment of what is great about ASU. As an ASU graduate, she will serve as a daily reminder to our students that ASU is preparing them to impact the world; as a Montgomery native, she is the representation of what makes Montgomery the Capital of Dreams; and as a leader, she has the vision and drive to lead ASU to Vision 2020 and beyond.”

Boyd is only the 14th president in ASU’s 146 year history and the first woman to serve as President.  President Boyd will succeed interim President and President Emeritus, Dr. William H. Harris.

Gwendolyn Boyd has spent the last 33 years working at John Hopkins University, where she currently serves as an engineer and executive assistant to the Applied Physics Laboratory chief of staff.

Boyd is a former Miss Alabama State University where she was an initiate of ASU’s Beta Eta Chapter of Delta Sigma Theta Sorority, Inc. Boyd has a B.S. in mathematics from ASU and a master’s degree in mechanical engineering from Yale University.  She has a doctoral degree in ministry from Howard University.

She is a past national president of Delta Sigma Theta Sorority, Inc., chaired the Johns Hopkins Diversity Leadership Council, and was appointed by President Barack Obama to serve on the Barry Goldwater Foundation for Excellence in Education.

Boyd and two other finalists were interviewed individually for approximately an hour at Friday’s meeting.  The trustees reportedly questioned the candidates on a range of issues about their experience and leadership style as well as expansion of the University’s academic and athletic programs.

The meeting was attended by ASU faculty and staff, student government officials, members of the governor’s staff, and members of the media. After a short deliberation, the board voted unanimously to select Boyd.

The University’s Student Government Association had already announced their support for Boyd in a letter by SGA President Sharod Campbell.

The board also authorized the Board Chair and Executive Committee negotiate a contract with Boyd for presentation to the full board. Boyd received a standing ovation from the board and the gallery when she returned to the boardroom following her selection.

The selection of Boyd comes after an exhaustive year long search.  The previous ASU President, Joseph Silver, was fired after accusing the ASU BOT of acting in an unethical manner.  In one angry BOT meeting, President Silver fired state Representative John Knight (D) from Montgomery by text message, before being fired himself by the BOT after less than 90 days on the job.

Governor Bentley ordered a forensic audit of ASU’s finances.  The auditor uncovered several contracts where it alleged that current and former BOT members’ families may have profited from contracts with ASU.  The auditors also charged that ASU officials including the BOT hindered their investigation.

ASU’s own investigation has since uncovered no financial improprieties and ASU has sued the forensic auditor.  Gov. Bentley has forwarded the forensic audit to federal and state authorities for further review. To this point there has been no indictments of anyone at ASU, but speculation and rumors about that possibility have been hanging over the Montgomery University for months.

It is hoped that President Boyd can unify the sharply divided factions among ASU’s student body and alumnae and move beyond the events of the last 14 months.