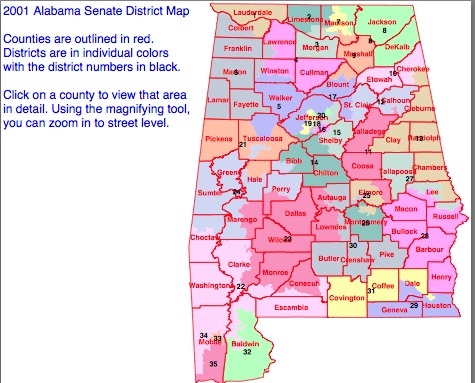 Last week a panel of three Federal judges ruled that Alabama’s 2010 legislative redistricting plan does not violate either the Voting Rights Act or the US Constitution. This ruling came as a big win for Republicans in the state, who had taken over the legislature for the first time in over a century and a half just before the time for the redrawing of election maps, which change every ten years due to population shifts reflected in the sentence. Notably, after the 2000 census, Alabama GOP leaders lost a law suit accusing Democrats of similar gerrymandering mischief.

The challenge to the 2010 redraw was brought by both the Alabama Democratic Conference and the Alabama Legislative Black Caucus, which claimed that the changes were based predominantly on diluting minority voting strength, not on equalizing population fluctuations. Their suit alleged the GOP “packed” minorities into some districts to lower their representation overall.

ADC Chairman Joe Reed commented on the 2010 plan to several news outlets:
“The impact will be to eliminate most white Democrats,” he claimed, “and to isolate Black Democrats,” who he said would have no real political power statewide.

The opinion of the three-judge panel was written by Bill Pryor, whose opinion said the move was not racially motivated.

“Nothing in section 2 of the Voting Rights Act would require the State to adopt… a less equal system for the election of its representatives to give minorities a better opportunity than other members of the electorate to participate in the political process. Stated differently, minority voters are not entitled to greater voting power than non-minority voters.”

Section 5 of the Voting Rights Act was rendered invalid by the US Supreme Court in a 5-4 challenge brought by Shelby County. The 2010 plan, however, had already been approved by the Department of Justice in accordance with Section 5 prior to Shelby County v. Holder.

Alabama Attorney General Luther Strange, who supports the plan, commented that his office is devoted to equal voting rights for every citizen in Alabama.

Alabama House Speaker Mike Hubbard said the decision affirms that the GOP “followed the letter of the law [in the 2010 redraw], as we all knew already.”

The 2010 census showed that 25.8% of Alabamians are African-American. 22.8% of new Senate districts and 26.7% of House districts are majority black.

Many, while acknowledging no racial wrongdoing, have expressed concerns over partisan competitiveness. V Team member Baron Coleman commented on a recent episode of the Voice of Alabama Politics that the 2010 redistricting has limited the number of seats traditionally considered toss-ups.

(Episodes of The V are available at youtube.com/aprthev )

Attorneys of ADC and the Black Caucus are considering an appeal. The U.S. Supreme Court previously denied to hear a particular part of the suit, but it typically does not hear cases that have not been fully exhausted in lower courts.

Myron Thompson, the lone African-American on the three-judge panel, dissented from the ruling.