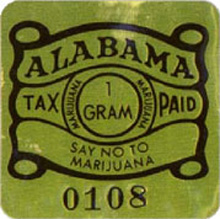 Since the late 1980s, when states across the US began cracking down on drug use by any means necessary, Alabama has had the legal power to assess a very unusual tax. Namely, a tax on marijuana and other controlled substances that – yes – are illegal.

The law, which was originally aimed at forcing those convicted of drug related crimes to pay financially as well as criminally, was effectively put out of practice years ago when it faced tough legal battles years ago. However, it has still existed on the books since its original inception. In fact, the State Comptroller’s Office reports that Alabama actually makes tax dollars off the programs, deemed the “illegal drug tax” every year. Since 2008, the State of Alabama has taken in nearly ten thousand dollars in tax revenue from the tax, with over half coming from just last fiscal year.

The assessment of the taxes are as follows, according to the Legislative Fiscal Office:

In reference to collection, state government regulations say that “Stamps are to be purchased immediately from the Department of Revenue when a dealer purchases, acquires, transports or imports into Alabama the illegal drug. The Department may make a jeopardy assessment or collection of the taxes due.”

Alabama’s illegal tax scheme has been held constitutional twice, once on self-incrimination issues in Briney v. State, and once on double jeopardy issues in Milner v. State.

In addition, the tax ironically exempts anyone from the tax that is in legal possession of the substance (although that is certainly not possible right now in the State, at least for marijuana):
“MAJOR EXEMPTIONS:

According to the Investigations Division at the State Department of Revenue, however, revenue from the tax stamps usually comes from collectors, or those just wanting a gag gift.

This novel practice might soon change, though, with the passage of House Bill 97 this legislative session, which “allows the Department of Revenue, by administrative rule, to suspend the collection of a tax or fee that the Department is authorized to collect, when the cost of administering the tax or fee exceeds the total amount collected from the tax or fee for each of the previous three fiscal years”

In other words, if it costs more than it makes, any tax can be suspended. While the fiscal note attached said that the only clear and immediate effects would be on a playing card tax and an iron ore tax, with very little revenue – and surely at least some administrative cost involved – Alabama’s quirky marijuana tax just might be a thing of the past. Some say it will not be long though, before it is back for good – and in actual use – with some states like Colorado already seeing significant tax revenue from medicinal and recreational marijuana use.

In 2021, Autery was appointed chief of police for the town of Maplesville