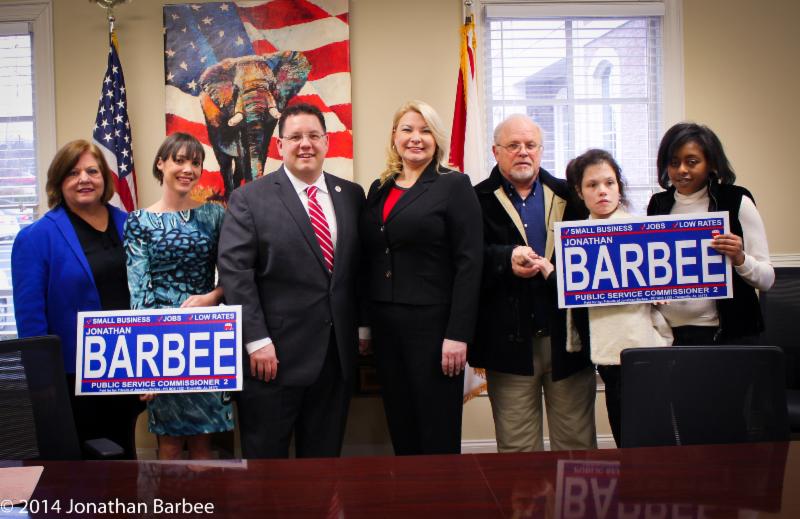 “We have already been campaigning vigorously through out the state since August. Our campaign team has spent countless hours making calls, fundraising, and reaching out to voters. I am excited to make this race official today. Alabama needs a strong, conservative, and passionate voice on the Public Service Commission. I want to serve the people of Alabama,” says Barbee.

Barbee officially kicked off his campaign back in August after the ALGOP Summer Dinner. He had over 350 supporters in attendance ranging from Executive Committee members to elected officials. Since then Barbee has traveled to over 30 counties and covered nearly 40,000 miles across Alabama.

“I’ve met with thousands of people across our great state and the one main concern they have is keeping their jobs. I pledge to fight the liberal environmental groups threatening our state and our jobs. We must secure Alabama jobs and use the Public Service Commission office as a recruiting tool for new business. Keeping our utility rates low, developing our railroads, and making sure our highways are safe will attract more industry. I pledge to continue Alabama’s positive relationship with small businesses and protect them from sky rocketing utility rates,” says Barbee.

Jonathan Barbee, both a rare Tea Party and GOP establishment favorite, gained popularity last year when he served as the Interim Alabama Republican Party Press Secretary. His press efforts continued through the 2013 Legislative session as he kept the public informed of important conservative legislation and led the fight against Democrats.

Jonathan Barbee, a small business owner, is the Executive Producer at Media Works Communications, a media production company in Birmingham which he started in 1997. Barbee has been a media and business consultant to numerous small and large sized businesses across the U.S. and abroad. He has over 17 years experience in the media industry and has received numerous regional and national awards. Barbee was elected by voters in 2010 to the Republican State Executive Committee and he also serves on the Jefferson County Republican Executive Committee representing District 44.

Barbee, 34, lives in Trussville and serves on the video team at Briarwood Presbyterian Church in Birmingham. He also serves on the Board of Directors for Kid One Transport and the Educational Arts Foundation. He spends his off time helping family with his Autistic sister, Deborah Anne. Barbee is engaged to Joanne Sellers of Tuscaloosa.

Various Alabama priorities were included in the funding measures.