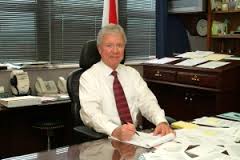 As the Republican Primary draws near candidates are working hard to distance themselves from their competitors.  In a year where Alabama Governor Robert Bentley (R) appears to be sailing to his party’s nomination, the Secretary of State race is shaping up to be one of the most interesting contests.  Former Montgomery county Probate Judge Reese McKinney’s (R) is one of three candidates pursuing the GOP nomination.

Judge McKinney’s campaign recently released a statement touting the judge’s experience and accomplishments.  The release said that Judge McKinney, “Has more than 34 years of public service experience. Judge McKinney served as Administrative Assistant for 20 years to the late former Montgomery Mayor Emory Folmar prior to serving as Montgomery County Probate Judge for more than 14 years.”

The campaign’s statement stressed to Republican voters that as the primary election draws near, it is important to examine the qualifications and experience of candidates running for Statewide office.

The campaign wrote:  “During his tenure, Judge McKinney administered more than 50 elections and established the nationally acclaimed Montgomery Election Center which has become a model of open government and transparent elections and is the home base of 1,000 highly trained elections volunteers. Judge McKinney has granted more than 1,000 adoption petitions as Probate Judge, and is known as a conservative reformer for his ability to leverage technologies to drive down administrative costs while improving public access to services. Judge McKinney was the first in the state to offer a number of online services to the public, including online document recording through the Probate Court’s Recording Office.”

The statement goes on to tout Judge McKinney for regularly returning unused funds to the public treasury and for successfully managed his office with a significantly reduced budget during the recent recession while refusing to increase court fees on the public.

Judge McKinney said in a recent St. Clair County event, “I am the only lifelong Republican, lifelong conservative in this race.”  McKinney asked members present to compare the candidates.  “I look forward to standing with you in the Secretary of State’s office.”

Judge McKinney is campaigning on his conservative credentials, slashing bureaucratic red tape and transforming the Secretary of State’s office into a pro-business, pro-job growth entity. The campaign statement says that McKinney’s experience in elections, adoptions, and administrative services will allow him to build upon this experience on his first day in office without subjecting the public to a learning curve.

Judge McKinney is a staunch proponent of photo ID for voters and reports having witnessed first-hand the vulnerabilities with current identification methods for voters. As Secretary of State, Judge McKinney is promising that he will ensure that Alabama leads the nation in voter integrity initiatives.

The Republican primary election will be held Statewide on Tuesday, June 3, 2014.