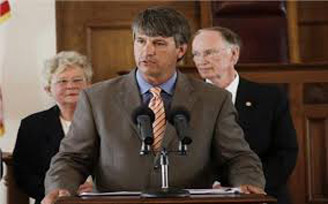 MONTGOMERY—In 2012, Representative Barry Moore (R-Enterprise), along with other House members, sought to insert language into State law that would benefit private companies who provided solid waste management within certain counties and/or municipalities, including a company owned by Moore.

Moore, along with fellow Republican legislators proposed this bill, even though Moore owned a solid waste management company (Barry Moore Industries) that would have stood to gain personally from this bill’s passage.

According to the companies website, “Barry Moore Industries, is a privately owned company founded in 2001. We provide an array of services including, dumpsters, waste management and hauling, demolition/site work, tire recycling, on-site data destruction and more.” The exact type of work listed in the House Bill 274.

Prior to his election to the House of Representatives in 2010, Moore never had a contract with the State. However, just two months after being elected, Moore received a contract with the Alabama Department of Environmental Management (ADEM). He has continued to enjoy government contracts since that date.

On the Barry Moore Industries website it says the company has, “negotiated, bid and successfully fulfilled more than $10,000,000  in multi-governmental agency contracts for municipalities, cities, counties, states,  USDA NRCS, DOT’s and other agencies.”

The bill, HB274, would have also made it illegal for, “a county, municipality, or solid waste authority that operates a solid waste disposal facility or recycling facility…[to] offer additional services that compete with private providers within its regional planning district.”

This legislation, if passed, could have been very lucrative for a company such as Moore’s. So, it begs the question, “Did Moore disclose to the House or to the Ethics Commission, that his vote on this bill would be a conflict of interest under State law?

Did Moore knowingly break the law that Legislators are not to use their office for personal gain?

This is very similar to the acts taken by former representative Greg Wren, who recently pleaded guilty to using his office for personal gain.

Moore has refused to speak with the Alabama Political Reporter.

And James Sumner, the Director to the Alabama Ethics Commission in an almost 12 minute tongue lashing, said he would not speak to the Alabama Political Reporter because we had written stories that he felt painted him in a bad light.

HB274 was referred to committee on Commerce and Small Business in February 2012, and never enacted into law.