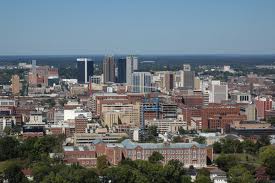 U.S. Senator Jeff Sessions (R) from Alabama issued a statement today to mark the groundbreaking of the initial segment of the Northern Beltline project in Birmingham:
“Today’s groundbreaking is welcome news for the Birmingham region and the state’s economy.

“Just like the completed I-459 project, the Northern Beltline is important to continued development throughout this part of Birmingham’s metropolitan area. I am glad to work with leaders of the state and region to see action begin on one of their top priorities. Our state and federal officials have worked hard for this project, including Governor Bentley, Rep. Bachus, and Sen. Shelby, as well as others like Mike Thompson. I worked on the Transportation Equity Act for the 21st Century which was an initial step in the process of planning for the Northern Beltline. Moving forward, we should ensure that the entire beltline is eventually completed. I look forward to supporting this and other priority transportation projects for Alabama.”

Congressman Bachus has long been a strong advocate for the Northern Beltline.

Representative Bachus said, “To continue to grow, a metropolitan area like the Birmingham region needs a modern transportation system and the Northern Beltline is a key component.  We now have the exciting opportunity to see the construction of a highway that we and future generations will enjoy and reap benefits from for years to come.”

U.S. Representative Bachus is retiring as representative of Alabama’s Sixth Congressional District when this, his eleventh, term expires at the end of the year.  Much of that tenure in Congress was spent working on the Northern Beltline.  Rep. Bachus fought for the inclusion of the Northern Beltline in the National Highway System and Appalachian Development Highway System to help ensure a steady federal funding source for the work and has won support for the project in several congressional highway bills.

St. Clair County Commission Chairman Stan Bateman (R) said on Facebook, “I was honored today to join Governor Bentley and others as we had the official groundbreaking for the jobs producing Northern Beltline. This new highway will be built using all federal money and will mean positive economic development for the Interstate 59 corridor and the communities of Argo, Springville, Ashville and Steele and indirectly for ALL of St. Clair County.”

The Birmingham Northern Beltline, also known as Corridor X1, will be the future I-422.  The Appalachian Development Highway System (ADHS) project is a 52-mile, limited access interstate to be constructed in Jefferson County, Alabama. The project would create a fully connected interstate route to serve the Birmingham region.

Last year, the U.S. Army Corps of Engineers finally issued the necessary permits to the Alabama Department of Transportation to begin construction of the initial segment of the beltline project.  The members of the Alabama congressional delegation have worked hard to move this project forward, including the 1998 Transportation Equity Act for the 21st Century and the most recent federal highway bill, MAP-21.

The 52-mile expressway would extend from Interstate 59/20 in Bessemer to Interstate 59 north of Trussville.  Commissioner Carrington speaking on a local talk radio show said that the project would take 25 to possibly 30 years, but that the portion connecting Trussville to Gardendale could be completed within 15 years.  The program took place off of Highway 75 in Palmerdale in Jefferson County at 9 a.m. Physical construction on the first 1.34 mile stretch of the road between Alabama 75 and Alabama 79 began on February 24th.

Environmental extremist groups with allies in Washington had attempted to block the project with a series of litigious delays challenging the long studied project.