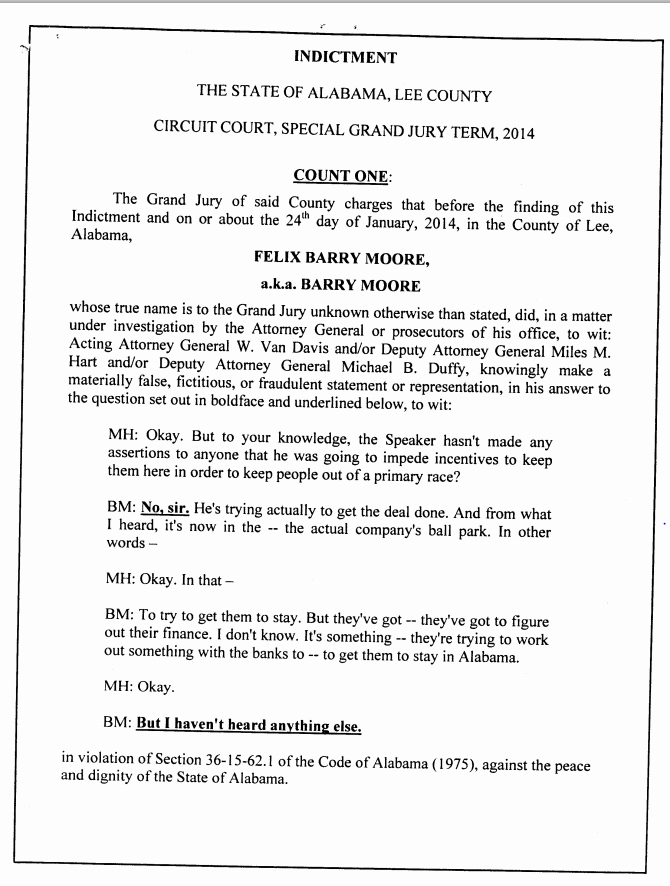 MONTGOMERY — Court documents in Alabama House Representative Barry Moore’s indictment outline, in explicit detail, the lies that he told leading up to his turning himself over to “special agents with the Attorney General’s Office” in Lee County, and being charged with four felony counts, two for perjury and two for misleading investigators.

According to the six page indictment, which can be seen here,  Moore “knowingly make a materially false, fictitious, or fraudulent statement or representation, in his answer” to the Lee county special grand jury in the two lines of questioning below. In both, AGO Special Prosecutor Matt Hart is interviewing Representative Moore.

The first conversation concerns a phone call reported on and released by the Alabama Political Reporter in which Representative Moore threatens his GOP primary opponent, Joshua Pipkin, by saying that the Speaker would kill an incentive program for Enterprise unless Pipkin dropped out of the June election. The court documents say the words in bold are the falsehoods for which Moore has been charged criminally. This conversation resulted in two charges, one for perjury, and another for misleading an investigator, both of which are Class C Felonies, punishable by from one to ten years in jail and a $15,000 fine per charge.

Barry Moore: No, sir. I told him – I said, if you – it was up to him if you want to run. But in my opinion, we were – I was going to do everything I could to make the deal happen, just to keep the jobs.

Matt Hart: Okay. And – and you didn’t assert to him that if he promised to stay out, that you would encourage the Speaker not to do this threat the Speaker had–

Barry Moore: I told him I couldn’t – you know, I can’t control the Speaker. I don’t have any control in that area. But I was going to do everything I could to make the deal happen.

Matt Hart: Okay. And you didn’t assert to him that the Speaker had, in fact, made that threat?

Moore’s statements in the above dialogue are indeed lies, as this audio recording from APR, available here, proves.

More on the audio tape and the controversy surrounding it can be read here.

The second line of questioning, resulting in the third and fourth charges, further expounds on the previous interview. Again, perjurious statements are in bold, as determined by the AGO.

Matt Hart: Okay. But to your knowledge, the Speaker hasn’t made any assertions to anyone that he was going to impede incentives to keep them here in order to keep people out of a primary race?

Barry Moore: No, sir. He’s trying to actually get the deal done. And from what I heard, it’s now in the – the actual company’s ball park. In other words –

Barry Moore: But I haven’t heard anything else.

An indictment is not a conviction, but an accusal. Moore is likely to be out on bail today, as it was set at $10,000.