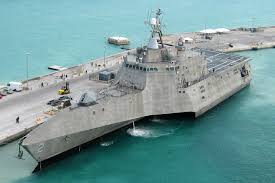 Austal USA builds the Independence-class LCS is built in the Port of Mobile, generating 4,000 direct jobs in Alabama’s First Congressional District. Byrne co-authored the letters along with Representative Reid Ribble (R) from Wisconsin who represents the the Marinette, WI, Lockheed Martin facility that builds the Freedom-class LCS.  Ribble and Byrne head a bipartisan group of 22 House Members from 6 states who support the navy’s LCS program.

Congressman Byrne said, “The LCS program is a critical component of our future fleet. The Secretary of the Navy, Ray Mabus, and the Chief Naval Officer, Admiral Jonathan Greenert, have said repeatedly that we need these ships in order to build an effective fighting force for the 21st century. Unnecessary cuts to this program now would be a tragic mistake, resulting in significantly greater costs to the taxpayer, setting back the Navy’s procurement schedule for a small surface combatant by a decade, and ultimately creating a manufactured crisis that could do serious harm to the program as a whole. I’m proud of our Alabama-made LCS that provides 4,000 Southwest Alabama jobs, and will continue fighting to ensure this program is preserved.”

Representative Ribble said, “The Littoral Combat Ship is an important component for the defense of our nation. Cutting more ships will be detrimental to our national security as well as harmful to the taxpayer. The Navy continues to ask Congress for these vessels, and in an era of reduced budgets we should not be looking to scrap the most cost-effective ship in the fleet as an answer.  The Navy will not meet its fleet-size goals, and the United States will not have the global presence that national security requires, without the LCS. Congress should support continued funding for them.”

On Tuesday April 29, 2014 Representative Byrne responded to the news that the House Armed Services Seapower Subcommittee mark of the National Defense Authorization Act (NDAA) was  made public this afternoon. The NDAA sets authorization levels for funding of all aspects of the military. The Seapower subcommittee mark released today is the title of the NDAA dealing specifically with the U.S. Navy and including procurement programs like the Littoral Combat Ship (LCS).

If passed, the Seapower Subcommittee legislation would authorize funding to initiate construction on four more LCSs through FY2015.  This includes full funding for two ships and funding for two more ships through Advance Procurement. This is consistent with the initial block buy of LCS that calls for four ships per year through FY2015.  The President’s budget requested a reduction in LCS purchases to 3 in FY2015.

Rep. Byrne said: “Today is a great day for Alabama shipbuilding and manufacturing. I’m proud that in a short amount of time, we have been able to build a coalition of support for this ship and make a strong case to Congressional leadership for its place in the future fleet.  The Seapower Subcommittee’s legislation sends a strong signal to the President, the Navy, and to our shipbuilders that the House Armed Services Committee is firmly committed to the LCS and its mission. I’ll keep fighting to continue this forward momentum through this fiscal year and beyond.”

Earlier this year Secretary of Defense Chuck Hagel (R) announced that DOD was poised to cut the LCS order by 20 ships from its original order of 52.

The Independence-class LCS has a top speed of 44 knots, carries a crew of just 40 sailors, and can be specially configured for mine sweeping, sub hunting, operating unmanned aerial vehicles, operating helicopters, and can support Marine or Special forces operations. The cost is $704 million each, although the original navy estimate was that the LCS would cost just $220 million each.  The smaller lighter LCS can operate in shallower waters closer to shore, the “littoral combat zone.”

The U.S. Navy plans had called for building 55 LCSs with the first twenty being ten each of the Independence-class and Freedom-class.