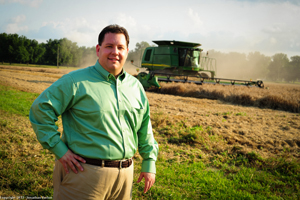 BIRMINGHAM—The Jefferson County GOP Straw Poll was held on Saturday with over 350 in attendance. Public Service Commission candidate Jonathan Barbee came in a close second in the poll trailing behind Chip Beeker by only 9 percent. The numbers were reported as follows, Barbee was 29 percent, Beeker was 38 percent, Brown was 18 percent and Dunn was 15 percent.

There is also a significant margin of error due to all of the names being out of order on the straw poll ballot and each candidate was called up to speak out of order. (Jefferson County GOP assures that this wasn’t done intentionally) With Jonathan Barbee being the first name on the actual ballot June 3, this may provide him with a 4 to 6 percent advantage in the real elections.

“I am so blessed to have people who believe in me and support our campaign. Finding out that I am in second place with only 9 percent between us was great news. Our campaign team was very excited and we are now taking this campaign up another step,” says Jonathan Barbee.

Why is the Barbee campaign excited about being a close second? Three reasons. The first is these small straw polls are usually pretty accurate and are ways for campaigns to see how they are moving in the polls. The second reason is that Barbee has only spent around $20,000 for his statewide campaign compared to the well over $200,000 dollars spent by the Beeker campaign. The third reason is that close numbers like these suggest there will be a runoff between the two candidates and organizations will start making endorsement decisions.

“We are keeping this campaign simple. Grassroots. We are meeting everyone we can, going to as many events as we can, and using the social media platform to our advantage. These numbers are good because they came a week before we launched our actual media campaign which would have made the race a bit closer,” says Barbee.

Barbee released a TV commercial on Sunday attacking President Obama for ordering the E.P.A. to force coal power plants to operate under stricter regulations which could raise Alabama utility rates by up to 20 percent.

In this article:Barbee, Jefferson County, news

"Health policy should be left up to the physicians and scientists, not a panel of lay people who might have political motivations."

"Given the high level of community spread, our hospitals need the public’s help in stopping the spread of COVID."