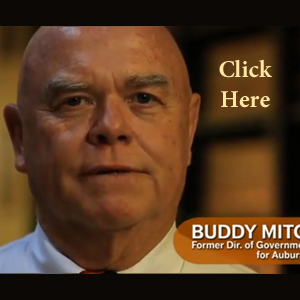 Buddy Mitchell has publicly, and in a sworn affidavit, accused Hubbard of masterminding a bid-rigging scheme that cost Auburn University millions in revenue. As a result of this revelation, Hubbard has unleashed a barrage of attacks on Mitchell, calling him a liar and a disgraced Liberal lobbyist.

Now, Mitchell has record a 60 second radio spot that calls Hubbard out.

In the spot, Mitchell repeats the story of Hubbard’s bid ridding scheme and then throws down a challenge for Hubbard to join him, under oath, or take a polygraph test. Mitchell, says that his motivation for coming forward is his love for Auburn University, were he spent much of his adult life. Again, Mitchell closes the radio commercial by saying, “You can’t trust Mike Hubbard.”

Hubbard has not denied the allegation that Mitchell gave him the secret bids.

A full report of these events was reported by the Alabama Political Reporter back in 2013.

Mitchell says that he assisted Hubbard in the bid rigging scheme by giving him the secret bids submitted by other media entities who sought the right to operate Auburn’s multi-million dollar sports rights contract.

The commercials in which Mitchell appears, have been paid for by Sandy Toomer, Hubbard’s opponent in the June 3, Republican Primary.