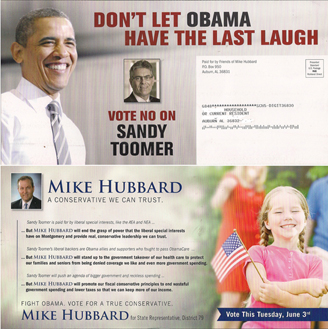 There will be no tanks on the streets, or soldiers with weapons locked and loaded as we go to the polls on Tuesday.

The only weapon of war that will have been used against the voters of our State, will be propaganda. This killing machine poisons the mind and soul, while leaving the body whole, at least for a time.

So far this election season, the propaganda machine has played mostly to our paranoias, fears and prejudices. This sort of information warfare has become stock-in- trade for modern political campaigns. Whether it’s Sen. Tom Whatley’s campaign photo-shopping an image of his opponent Andy Carter walking at Toomer’s Corner with President Barack Obama, (something that never happened) or Sen. Jerry Fielding a life long Democrat accusing his life long Republican opponent Dr. Jim McClendon of voting with Obama, (an outright lie).

Obama has been so widely used in political ads run by Republicans, that the whole State must be wondering why the President isn’t on the ticket.

Let me be among the many who will tell you, Barack Obama doesn’t care who is running for office as a Republican in Alabama. He doesn’t fear our State’s Republicans and couldn’t pick any of them out of a line-up.

Perhaps the most despicable ad of the year has been the one recently released by Speaker of the House Mike Hubbard, R-Auburn, who is so desperate to hold on to power that he has stooped to the lowest levels of campaign propaganda. In his latest mailer the headline reads, “Don’t let Obama have the last laugh.” Here Hubbard has placed a picture of the President grinning widely, as if ready to break into a laugh, hovering over a smaller image of Hubbard’s opponent Sandy Toomer.

In Hubbard’s mind, this is supposed to make the voter think that Obama is backing Republican Toomer. But, that is just part of the message Hubbard is trying to convey. When the mail card is flipped over there is a picture of an unnamed little white girl holding an American flag.

Hubbard is playing the “race card” and using the image of a white child waving a flag to do the dirty work.

On one side, the grinning black man; on the other, the innocent white girl.

It is amazing that the black athletes at Auburn University do not boycott until Hubbard is removed from his position overseeing the media rights to Auburn athletic. It is shocking that the sports giant IMG continues to employ Hubbard after this racist innuendo.

Politicians have become masters of using the dog whistle, coded images and selective facts, also know as lying by omission. This primary season, Republicans have used the words, liberal, special interests and Obama to salt so many commercials that one has to wonder if that salt has lost all flavor. It seems no one is campaigning on issues, they are running against a disliked president and the idea of some liberal special interest that does not exist.

A master of propaganda once wrote, “To attract people, to win over people to that which I have realized as being true, that is called propaganda. In the beginning there is the understanding, this understanding uses propaganda as a tool to find those men, that shall turn understanding into politics. Success is the important thing. Propaganda is not a matter for average minds, but rather a matter for practitioners. It is not supposed to be lovely or theoretically correct. I do not care if I give wonderful, aesthetically elegant speeches, or speak so that women cry. The point of a political speech is to persuade people of what we think right… We do not want to be a movement of a few straw brains, but rather a movement that can conquer the broad masses. Propaganda should be popular, not intellectually pleasing. It is not the task of propaganda to discover intellectual truths. Those are found in other circumstances, I find them when thinking at my desk, but not in the meeting hall.”

These are the words of Adolf Hitler’s Propaganda Minister in Nazi Germany, Joseph Goebbels.

The political class on the right as well as the left has learned what Goebbels knew: that good people can be tricked into believing anything, if the right propaganda is employed.

So, it is that the voters only know that, “Obama is bad, my opponent is in bed with him and therefore you must vote for me.”

Sen. Gerald Dial’s campaign even produced a commercial in which his opponent Tim Sprayberry is literally in bed with Obama. Sprayberry is not a liberal, he is not friends with the President or doing his bidding, but there he is cuddled up to Obama. The ad makes for great entertainment, but is short on truth or real information.

Sadly, many of our citizens are simply too busy working and living their lives to gather all the information they need to make a truly informed decision; so these false commercials may have an effect. Even worse are those who use Obama’s image and name as a racist tool to play on people emotions.

But many of our politicos are addicted to the power of office and lure of easy money. In our representative Democracy, voting is a sacred duty extended to every individual 18 years of age.

Theodore Roosevelt  said, “A vote is like a rifle; its usefulness depends upon the character of the user.”

Hopefully, during this primary, the voters will know what to do, despite all the propaganda.

But in our State, politicians don’t think facts should influence the vote.