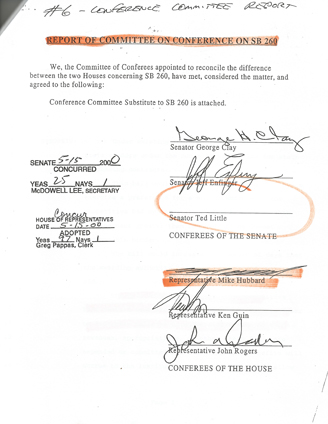 MONTGOMERY—In 2000, then Rep. Mike Hubbard, R-Auburn, said that he abstained from voting on a bill that would benefit his contractual relationship with Auburn University athletics. But did he really abstain, or merely hide his manipulation of the process to his use of his office for personal gain?

Under Hubbard’s influence, a simple bill that would have made it easier for Alabamians to receive preference when bidding for State contracts, became a law that exempted university athletic departments from competitive bidding and extended University contacts from three years in length up to 10 years.

Since the law passed, Hubbard has been accused of using the “No Bid Contract Law,” to profit his company Auburn Network, when it signed an $8.5 million contract for the media rights to Auburn athletics.

Hubbard has stated publicly that he abstained from voting on the measure to avoid, “even a perception of a conflict of interest.” However, a careful reading of the bill’s history reveals that Hubbard shepherded the bill in the House and was on the conference committee that led to its passage. He also voted for the final bill which was written in a form favorable to Hubbard’s business interests.

Yes, he did vote for the bill.

In a long series of strategic moves, Hubbard was able to manipulate the legislative process but appear to not vote for the bill, while still moving it forward.

SB260 was first introduced in the Senate on February 3, 2010 by Senator George Clay, D-Tuskegee. The initial purpose of SB260 was to level the playing field for Alabama vendors with out-of-state vendors when bidding on contracts with State entities with the exemption of public works. A “preferred vendor” must meet one of three criteria: produce or manufacture the product within the State, have an assembly plant or distribution facility for the product within the State or be organized under applicable laws of the State (having operated at least one retail outlet or service center for the product for not less than one year before the competitive bid deadline). The bill stated that as long as the bid of the “preferred vendor” was within a range of 5 percent, that the entity could enter into contract with them even if they were not the lowest bidder.

On February 13, Senator Ted Little, D-Auburn, offers an amendment that added two-year and four-year colleges to the property purchasing bill, with a 5 percent over threshold for in-State bids. The bill is then passed by the Senate on a 29-0 vote and transmitted to the House for consideration. The House took-up the measure on February 13, and referred it to Government Affairs Committee.

When SB260 came out of the House Government Affairs Committee, it had been substantially altered from the original bill offered in the Senate.

The House substitute includes the following changes to SB260:

When the substitute came to the floor of the House, it was Hubbard who made the motion for a BIR, asking the House to vote on SB260. Yet, Hubbard abstained from the actual vote.

Again Hubbard takes the lead, makes the motion for a third reading of SB260, but again abstains from the vote. Hubbard finally makes the motion to adopt the substitute of SB260 but again abstains from the actual vote. In an unusual move Hubbard requests that the Journal reflect that he abstained from votes “due to a possible conflict of interest.” However, it was Hubbard who walked the bill through the House, step-by-step, calling for each motion and then publicly making a show of not voting.

When news of the rejection gets to the House, Hubbard makes a motion to enter into a conference committee with the Senate. Hubbard votes “yes” on his motion for conference committee. This is the first recorded vote by Hubbard on SB260 but it will not be his last.

At this point, Hubbard asks to be appointed to the conference committee and is granted a seat along with Rep. Ken Guin, and Rep. John Rogers. With three Senators and three Representatives (including Hubbard), the committee writes the final version of the bill. The final version included a change that would not exempt the entire college from the bid law, only the athletic departments, food services and transportation. Only five of the six committee members signed the conference committee report, including Hubbard.

Sen. Little refused to sign, feeling that the bill had steered too far from its original purpose. SB260 goes to the Senate for approval, where Little was the only Senator to vote no. The bill passes the Senate 25-1. The bill goes to the House for approval, here again Hubbard is the one to makes the motion to adopt the committee report.

Hubbard then cast a “yes” vote for the bill that would completely change the way university athletic contacts are handled. This enabled Hubbard to extended his contract with Auburn Athletics and make millions without the need for competitive bid process.

Hubbard has said he never voted for the bill, but a review of the history of SB260 shows not only did he vote for the bill in conference committee, he also voted for its adoption and final passage.

For over 14 years, Hubbard has told a different story than the facts prove.