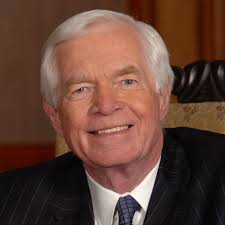 The political world was shocked by the outcome of the Republican Primary Runoff in Mississippi on Tuesday, June 24.  Longtime incumbent Mississippi U.S. Senator Thad Cochran appeared to be outmatched against the younger, more fiery State Senator Chris McDaniel, who had the support of the national Tea Party movement.

Senator Cochran however seized on encouraging Democratic voters to vote in the Republican runoff.  The senior senator from Mississippi who has been in Congress since the Nixon Administration realized that Republican voters’ minds were already made up so he appealed to liberals, Blacks, and union members in the closing days of the campaign and it appears that the strategy has worked upsetting many in the Tea Party movement across the country.

Former Alaska Governor Sara Palin (who endorsed McDaniel) said on Fox News, “Well, you know, as for the primary, and perhaps if it’s true, some shenanigans going on there, nothing should surprise you, but that’s old-school politics where it’s a bit of the status quo and that’s got to go.”

Talk radio host Rush Limbaugh called the tactics “reprehensible.”  Limbaugh said, “The Republican establishment sought victory via Democrat voters in the runoff, and they got them. Without the African-American vote from Democrat-leaning counties, Thad Cochrane would have lost by eight or nine percent last night.”  Limbaugh cited a flyer posted by journalist Charles Johnson suggesting that McDaniel and the tea party wanted to prevent blacks from voting in the Mississippi runoff election on Tuesday.

In many states if you are a registered Democrat you can’t vote in a Republican Primary or Primary Runoff.  However Mississippi, like Alabama, has open primaries.  Like Mississippi and just nine other states, any registered Alabama voter can vote in whatever party primary they want to vote in.

Alabama Republican Party Chairman Bill Armistead has been warning that the way election law is set up in Alabama there is little either party can do to stop mass crossover voting like what we saw in Mississippi on Tuesday.

Chairman Armistead wrote just two weeks ago, “When I ran for Chairman of the Alabama Republican Party I vowed to seek ways to ensure that Republicans voted to select their candidates in the Republican primary and Democrats voted to select theirs in the Democrat primary. I appointed a committee in 2011 to look into how other states have successfully handled party primaries, in order to guide Alabama down the same path. The committee recommended that the Party support what is known as “closed primaries”, meaning that only Republicans vote in a Republican primary and only Democrats vote in a Democrat primary.”

Armistead continued, “At the 2013 Summer Meeting of the Alabama Republican Party State Executive Committee a resolution was passed endorsing closed primaries in Alabama and urging the legislature to take steps towards party registration.”  Alabama currently is one of 11 states with open primaries where voters do not have to declare affiliation to any party and can request whichever ballot they choose at the polls.  An independent or a Constitution Party or Libertarian Party supporter can legally vote in whichever major party primary they feel like voting in on election day.

The Alabama Political Reporter is not aware of any campaign openly adopting a crossover voter strategy in the runoff.

Clinton Administration Labor Secretary Robert Reich wrote on Wednesday, “Mississippi Republican Senator Thad Cochran’s razor-thin margin of victory last night over State Senator State Senator Chris McDaniel, his Tea Party-backed challenger, in the Republican primary there, should be small comfort to the establishment GOP – or to any American. Cochran relied on Black Democrats to put him over the finish line, prompting McDaniel to charge that his rival has shown his true colors.…By reaching out to liberal Democrats he has confirmed what we’ve always known: that he doesn’t have our best interests at heart.”

“Excuse me, but ‘our’ best interests? McDaniel and the Tea Party played on the growing fears of working-class whites that their economic decline has been due to a conspiracy of blacks, Latinos, immigrants, and the Federal government – from which they must ‘take America back.’ The billionaire oligarchs who funded McDaniel through their various front groups want anxious White Americans to believe this dangerous fiction, and they and their money aren’t going away. That’s why it’s so important to create a new political coalition that unites working-class whites with the poor and middle class, to take back America from the oligarchs.”

Governor Palin said on Fox News, “Well, if Republicans are going to act like Democrats, then what’s the use in getting all gung ho about getting Republicans in there?  So yeah, if Republicans aren’t going to stand strong on the planks in our platform, then it does no good to get all enthused about them anymore.”