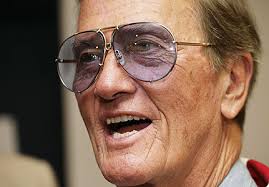 In a statement released by 60 Plus, Boone remarked, “I’m still singing at concerts, but today I’m singing the praises of Chip Beeker. Seniors can depend on Chip Beeker.”  Boone, 80, and his wife of 60 years, Shirley, reside in Beverly Hills, California.

Boone is familiar to audiences as a star of music, film and television. Boone has had 38 top-ten hits since his recording career began in the 1950s, and, according to Billboard magazine, still holds the record for the most consecutive weeks (220) on the charts by any performer.

The 60 Plus Association, the Nation’s largest conservative seniors organization with over 7.2 million senior supporters, today announced its endorsement of Chip Beeker for Alabama’s Public Service Commission.

Chip Beeker is a longtime catfish and cattle farmer who is committed to protecting Alabama’s seniors from rising costs of utilities associated with Obama’s War on Coal and the EPA’s regulatory overreach.

“Alabama seniors need a conservative representing them on the Public Service Commission, and the most principled choice in this race is Chip Beeker,” said Jim Martin, Chairman of the non-partisan 60 Plus Association.

Regarding the threats facing seniors today, Martin said, “Obama, West Coast environmentalists and the AARP have brought their liberal agenda to Alabama and are banking on using the Public Service Commission to wage their war on jobs and low energy prices; Electing Chip Beeker is the only way to send a clear message that we aren’t interested in their efforts to drive up the cost of energy and kill Alabama’s jobs.”

“On behalf of the more than 90,000 plus senior supporters 60 Plus represents in the great state of Alabama, I’m proud to offer our endorsement to Chip Beeker.”

Founded in 1992, the 60 Plus Association is a non-partisan seniors advocacy group with a free enterprise, less government, less taxes approach to seniors issues.

The 60 Plus Association is a 20-year-old nonpartisan organization working for death tax repeal, saving Social Security and Medicare, affordable prescription drugs, lowering energy costs and other issues featuring a limited government, less taxes approach as well as a strict adherence to the Constitution.  60 Plus calls on support from over 7 million citizen activists.

60 Plus publishes a newsletter, SENIOR VOICE, and a Scorecard, bestowing awards on lawmakers of both parties who vote “pro-senior.”   60 Plus has been called “an increasingly influential senior citizen’s group” and the acknowledged conservative alternative.