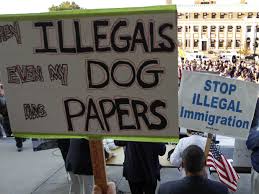 BIRMINGHAM—A group has announced plans to protest the current border crisis and a controversial immigration reform proposal that is under consideration in the U.S. House of Representatives.  The protest to coincide with the National Day of Protesting Against Immigration Reform, Amnesty, and Border Surge will be held over two days on July 18 and 19.

Since October, more than 52,000 unaccompanied children from Central and South America have entered the U.S. through its Southwestern border. The children (most of them teen males) are in the custody of the Department of Health and Human Services Office of Refugee Resettlement.  Office of Refugee Resettlement statistics show about 6,775 unaccompanied children arrived in the U.S. each year from 2003-2011. That figure grew to 13,625 in 2012 and almost doubled to 24,668 in 2013.

The most common native country for the unaccompanied children is Guatemala, followed by El Salvador and Honduras.  This new flood of illegal aliens started coming after President Obama began claiming the Executive authority to give millions of illegal aliens who were brought here as juveniles by their parents legal status in the country in the 2012 election year to galvanize his support among immigrant voters, particularly Hispanics.

Congressman Mo Brooks (R) from Huntsville stated recently, “The Obama Administration is interpreting the 2008 law to require unaccompanied alien children from countries that do not border the United States to go through costly and time-consuming deportation proceedings before being returned to their home countries and families.  The Obama Administration ties the hands of American Border Patrol agents by denying them the ability to expeditiously return these unaccompanied minors.”

Most of the illegal alien minors are being released to relatives in the United States or sponsoring charitable organizations while they await a hearing that could be months or years in the future.  Critics charge that most are likely to never be deported, which only encourages more people to break our immigration laws and come to the U.S. illegally.

The purpose of the protest is to raise awareness of the issue among the public and to send a message to Congress not to pass any form of amnesty, that the current chaos on the border is unacceptable, and that the border should be secured and current immigration laws should be enforced.

For more information about the anti-illegal immigration rally in the Birmingham area contact Deanna K. Frankowski at 999-1592.