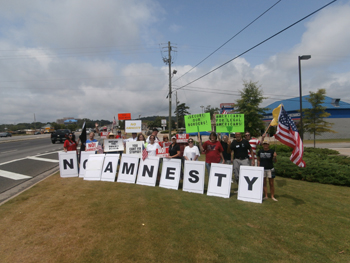 On Saturday, July 19, a group held a demonstration to protest the current border crisis, to urge members of the U.S. House of Representatives to oppose a controversial immigration reform proposal that passed the Senate last year, to urge the administration to enforce existing border laws, and to oppose amnesty to millions of illegal aliens who are already here.

The protest in front of the North Shelby County Wal-Mart on U.S. Highway was part of the National Day of Protesting Against Immigration Reform, Amnesty, and Border Surge rally that took place I hundreds of communities across the country over July 18 and 19.

On Saturday morning, the Alabama Political Reporter spoke with participants of the event, which drew nationwide news coverage.

One of the organizers of the Alabama event, Deanna Frankowski from Leeds, told us that the “Make Them Listen” movement started as a Facebook page to oppose the push for amnesty and eventually they decided to do the rally.  Frankowski said that there were close to 400 rallies happening concurrently across the country.

One participant who identified himself as the frequent Birmingham area talk radio caller, “Cornbread,” told the Alabama Political Reporter, “We don’t want amnesty.  I have no problem with legal immigrants coming in the right way, but we should be a sovereign country.”

Cornbread said that the current immigration situation is not right and said, “We want to enforce our immigration laws.”

Becky Cheney from Montgomery said, “We are already struggling: Look at Detroit. Our bridges and infrastructure are in terrible shape and many people in this country are living in horrible conditions.  Cheney said that our economy can not handle the influx of an additional 20 to 30 million immigrants over the next ten years.”

Cornbread said that the people that are coming for the most part are, “Not Rhodes scholars.”  Many of the persons coming here are, “…thugs and criminals.”

Frankowski said that every state had a rally and states like Texas and California where they are feeling the effects of this more than we are at this point held several rallies.  Frankowski emphasized that she is not opposed to Hispanics or to legal U.S. immigrants but the President is not abiding by the current law.  The illegal immigrants are being used as, “Pawns in a political game,” by President Obama.

Frankowski did say, “I do think there needs to be an avenue for citizenship,” for non-criminal illegal aliens who are already here provided they pay a fine and go to the back of the line; but before Congress addresses that they need to close the border.  Frankowski said that President Obama is bypassing Congress by making up his own immigration laws by executive order and is encouraging the current border crisis.  “That $4 billion should be put on the border,” Frankowski said.

Frankowski said that most people on Hwy 280 were supportive of the event but there was some negative reaction as well.  “One man threw a bottle at us.”  Frankowski also said that one carload of people (she assumes were illegal) stopped and called their group un-Christian for not wanting them to come here.

The Alabama Political Reporter asked Cornbread if he favored the Senate bill which would give a pathway to citizenship to the over 12 million illegal alien already in this country and dramatically increase legal immigration to over two million persons a year.  Cornbread said that he does not.  Cornbread said that our economy can handle this.  Importing the poorest of the poor from other countries and then putting them on some sort of welfare where they have to be taken care of by taxpayers for years will be a disaster for this country, Cornbread predicted.

Ms. Frankowski called the illegal immigration crisis a, “Sad situation.”  Frankowski said that this is a national security crisis and is also a health crisis.  Tuberculosis, measles, and scabies are coming in to this country along with the illegal aliens.

Frankowski said that state Senator Scott Beason had the foresight to try to do something about this at the state level with his bill, HB56 but was blocked by Obama and the federal government.  Frankowski said that the Alabama event got national news coverage from CNN, Breitbart, Fox News, AL.com, ABC, CBS, NBC, NPR, as well as from the local talk radio stations.

While she herself is a conservative she does not see the border situation as a Republican or Democrat issue.  It is a U.S. citizen issue, Ms. Frankowski said.

Since October, more than 52,000 unaccompanied children from Central and South America have entered the U.S. through its southwestern border. The children (most of them teen males) are in the custody of the Department of Health and Human Services Office of Refugee Resettlement.  Office of Refugee Resettlement statistics show about 6,775 unaccompanied children arrived in the U.S. each year from 2003-2011. That figure grew to 13,625 in 2012 and almost doubled to 24,668 in 2013.

The most common native country for the unaccompanied children is Guatemala, followed by El Salvador and Honduras.  This new flood of illegal aliens started coming after President Obama began claiming the executive authority to give millions of illegal aliens who were brought here as juveniles by their parents legal status in the country in the 2012 election year to galvanize his support among immigrant voters, particularly Hispanics.