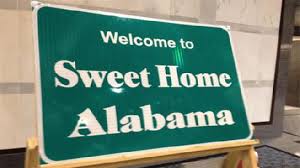 MONTGOMERY – The Alabama Tourism Department and the Alabama Department of Transportation have announced that the public welcome signs that can be seen upon entering the Yellowhammer State will be getting a facelift – to the tune of $136,000 over just the next five years.

The welcome signs on our interstate entryways, erected in 2003, currently don the phrase “Alabama the Beautiful,” though now the slogan will change to “Welcome to Sweet Home Alabama,” a move that will cost state taxpayers significant funding for the foreseeable future.

One one hand, temporary rights for the phrase “Sweet Home Alabama” have been negotiated with Universal Records, who owns the trademark, for a five year period at a cost of $75,000, after which the state would either renew the financial agreement with the studio or forfeit use of the motto.

Additionally, the Alabama Department of Transportation has said that it will phase out the old fifteen by eighteen interstate signs as well as several three by four signs located in welcome areas and the like at a total expense of about $61,000.

All in all, then, the cost of the new welcome signs paired with the cost of the rights necessary to use them will cost  Alabamians six figures in a time when both the Education Trust Fund and General Fund Budgets are cash-strapped.

Sentell also pointed out that the tourism department is negotiating further agreements with Universal Records that would allow for the sale of t-shirts and other memorabilia in the state using the phrase.

Until this year, Alabama’s license plates included the phrase, though the design was abandoned due to concerns that the plate’s state of origin was not readily identifiable at the top of the tag.

According to ALDOT Director John Cooper, the first of the new signs – of which a majority will be placed over the next few months – will be placed on Interstate 85 in east Alabama.