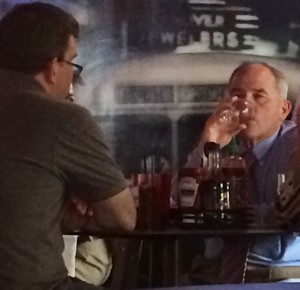 The above picture captures the pair sharing drinks at the Paramount Bar in Birmingham.

One of White’s specialties is his gift for persuading the media to report on his clients in a favorable light.

Archibald is often known to rip and tear into the flesh of his subjects with irony and barbed wit.

Tossing back his Chardonnay with aplomb, it looks as if White hopes to become Archibald’s Svengali.

White is most noted for having two finely-honed skills: One, his ability to influence the press and two, wooing the judiciary.

White has done a masterful job of cowing the press, threatening lawsuits against some and batting his considerable eyelashes at others. Hubbard has made some ludicrous statements along the way that would normally cause a media feeding frenzy. Unfortunately, with just a few exceptions, the media has played along with White. Hubbard is never asked the tough questions or the follow-up questions that would ultimately call his hand.

White’s cozy relationship with the press and judges may help him draw fat fees from corrupt politicos, but this is the very thing that makes the public-at-large despise attorneys and distrust the media.

In the world manipulated by White and his client Hubbard, Justice is not blind, and well, the press will work it all out over drinks in a posh bar.

I would like to have a drink with White, and hey…

I’ll even pick-up the tab.